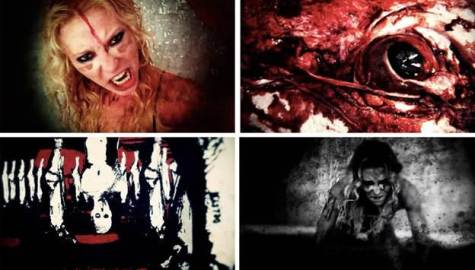 "Cruelty Without Beauty", the new video from Swedish/German extreme metallers ARCH ENEMY, can be seen below. The song comes off the band's ninth album, "Khaos Legions", which sold around 6,000 copies in the United States in its first week of release to enter The Billboard 200 chart at position No. 78.

Commented ARCH ENEMY singer Angela Gossow: "I'm very pleased we got this video done for one of my favourite songs off the 'Khaos Legions' album. The video is quite raw and extreme as it reflects the lyrics very well, I believe, dealing with a subject matter close to my heart — animal cruelty and vivisection.

"We want to thank the good folks at Peta2, Hardforce, Metalitalia and The Metal Circus for supporting a serious subject.

"All of us have been well aware that a video like this doesn't find everybody's acceptance. But rock music was always more than guitar riffs — it's also the voice of the voiceless."

"Khaos Legions" was released in Europe on May 30, 2011 and in the U.S. on June 7, 2011 via Century Media Records. The CD marked the band's return to new, original material, after the release of the "Tyrants Of The Rising Sun - Live In Japan" live DVD/CD (2008) and the re-recordings album, "The Root Of All Evil" (2009). The effort was tracked at Sweet Spot Studio in the south of Sweden with engineer Rickard Bengtsson (who produced 2005's "Doomsday Machine").