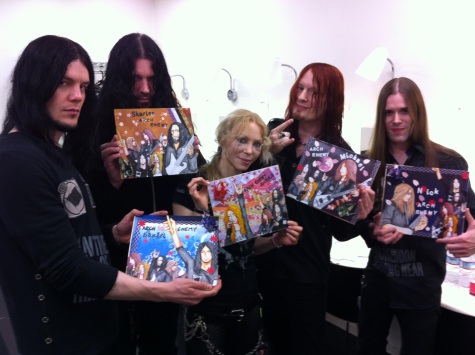 Swedish/German/American extreme metallers ARCH ENEMY made their live debut with new guitarist Nick Cordle (ARSIS) this past Friday, April 13 at Shibuya Ax in Tokyo, Japan. Check out photos at Creativeman.co.jp.

ARCH ENEMY earlier in the year amicably parted ways with guitarist Christopher Amott and replaced him with 26-year-old Cordle.

Commented ARCH ENEMY in a statement: "We thank Christopher for the time he's worked with the band and, of course, wish him the very best in his future endeavors. Thankfully, there is no drama behind the scenes here. This is the best way forward for all involved. Christopher simply isn't into playing extreme metal anymore. We have already chosen and rehearsed with a new guitar player and we will complete the 'Khaos Legions' 2012 touring cycle as planned. We are highly motivated and look forward to continue spreading our music around the world! Finally, our deepest thanks go to the ARCH ENEMY fans, whose amazing support and belief inspires us ever onward."

Added Michael Amott: "Nick was my first choice as he ticks all the right boxes for ARCH ENEMY with his musicality and technicality as well as his personality and dedication. [We are] looking forward to having him join us stage, the rehearsals have shown we have a devastating twin axe attack going on!"

Nick Cordle was raised in a musical family in Virginia by parents who teach classical piano and was immersed in 19th-century piano music as a child. Rachmaninoff, Brahms and Liszt are his early memories. There were piano and violin lessons from a very early age but a rebellious streak led to the guitar at the age of 10, and within a few years he discovered the classic thrash metal albums by MEGADETH, METALLICA, and SLAYER. This was his first real musical passion and gateway into extreme music.

Nick studied jazz and music theory at the University of Virginia from 2003 to 2007 but remains self taught in the ways of "shred" and metal. Shortly thereafter, he joined American death metal band ARSIS playing bass and guitar over a three-year period, performing with them on various European tours and countless gigs across the U.S., Canada, and Mexico as well as performing and writing on their most recent album, "Starve For The Devil" (2010).