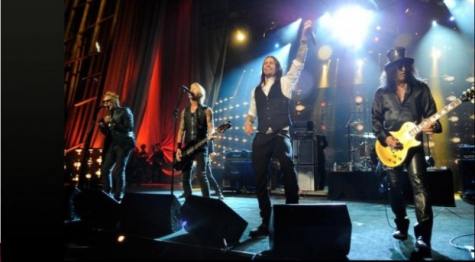 SLASH On GN'R ROCK HALL Induction: 'It Really Felt Like Closing The Book On The Whole Thing'

During a brand new interview with RollingStone.com, legendary guitarist Slash (VELVET REVOLVER, GUNS N' ROSES) spoke about what it felt like to be inducted into the Rock And Roll Hall Of Fame without singer Axl Rose, who refused to attend the ceremony and be inducted with his former bandmates.

When asked if he ever considered just not going to the induction ceremony, Slash said, "My whole thing was that I really, in my heart of hearts, wanted to have the whole original band get together and actually perform, which I sort of knew was wishful thinking. When the whole thing first came up, that's basically what I wanted to do. It became apparent that that wasn't going to happen. I was like, 'Oh fuck,' and I was sort of disillusioned with the whole thing, but there was that commitment that was sort of made that I was going to go, and I thought Axl was still going to go, and it wasn't until the last minute that I heard that he wasn't coming, and that's when we all decided we were just going to go ahead and play anyway. Early on, when it was probably more confusing than necessary, I have to admit, I was like, 'Oh fuck, I don't really want to go to this if we're not going to play,' though I never said, 'No, I'm not going to go.' But it was sort of a black cloud for a few months there. Before that I thought we were just going to show up and not play, which is what I was resigned to."

In addition to Axl Rose, who announced earlier in the month that he would not attend and was not accepting his induction, other missing members included original guitarist Izzy Stradlin and longtime keyboardist Dizzy Reed, who still plays in the current version of the band.

When asked at which what point they decided to play at the ceremony, Slash told RollingStone.com, "It was literally two days before the actual ceremony. The day that the press release came out and Axl said he wasn't coming, we had the [Revolver] Golden Gods awards, and it was in the dressing room there that Duff and I talked. We said, 'OK, we're just going to fucking get together and play,' and Duff goes, 'We should get Myles [Kennedy from ALTER BRIDGE and Slash's solo band].' I was talking to Duff about who was going to sing, I thought Duff would sing, him and Gilby, but Duff said, 'What about Myles?' It hadn't occurred to me, really. I talked to Myles about it, he was apprehensive about getting put in that position, so at first, he turned it down, but finally he said, 'OK, I'll do it.' We got it all together and we put together a little rehearsal the night before and did our thing."

In a separate interview with RollingStone.com, Adler said that he'd finally given up hopes for a GN'R reunion and wanted to move on with his life. He also said was is the last interview he would ever give about Axl. "He showed his true colors to the world," the drummer said. "I'm done with him, I'm never mentioning him or talking about him again. . . I feel blessed and thankful that he was a part of my life for that chapter of my life, but that's it. That's it. I have no desire to know him or work with him or do anything with him again. Letting go of that was like a huge weight was lifted off my body. I feel fucking free."

Regarding the prospect of a classic GUNS N' ROSES reunion at the Rock Hall induction, Slash said, "I didn't have any illusions or delusions of GN'R getting back together for anything. I maybe tried to see it happen for this one particular event, I didn't have high hopes for that, I didn't feel confident it was going to happen, but having done this one gig, and for the event itself, when it was all said and done, it really felt like closing the book on the whole thing."