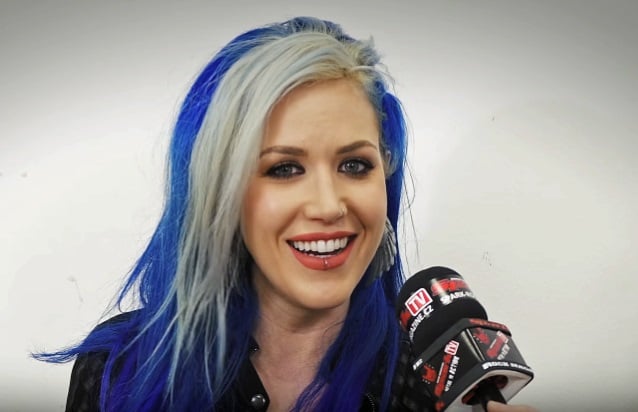 Spark TV, which is part of the Czech monthly magazine Spark, conducted an interview with ARCH ENEMY vocalist Alissa White-Gluz prior to the group's January 14 performance in Prague. The full conversation can be viewed below. A few excerpts follow (as transcribed by BLABBERMOUTH.NET):

On the band's current live production:

Alissa: "We have a very talented stage and lighting manager. He does the production, and he sets it up, and he arranges it, and he does the lights — Martin Müller. He has worked with lots of bands, and he basically gets these visions for how he sees things on stage. Sometimes, I'll sit down with him and be like, 'Okay, what color scheme are you going to have here? I'm going to try to put some sepia tones in my outfit because you have a sepia tone in the background,' or, 'Okay, you have blood splatter here, so I'm going to get blood splatter on my outfit.' We try to work together with that. Even sometimes it makes it impossible for us to see on stage because there's so many lights shooting right in our eyes, but we're always like, 'Well, does it look cool? Because if it looks cool, we'll just suffer through it.' So, usually on stage, we're blind — we can't see anything. But yeah, I think that he has a really good vision for that kind of production. In the past, I used to work with set design for theater, so I really like seeing him work and seeing how he envisions these things."

Alissa: "I actually have to be in a bad mood for it. The most common time I write lyrics is the middle of the night. I actually wrote a poem last night at, like, 5:30 a.m, because I'm super jet-lagged. Sometimes, the inspiration strikes. I really like writing poetry and lyrics because it's one thing where I give up control. I don't feel like I need to be in control of it. I just sort of let it happen, and then I know when it's done. I know when it's finished. With painting, for example, sometimes you can keep putting another paint stroke on there, and you don't know exactly when the last stroke is going to happen, but I feel like when I write lyrics, I just know — I just feel it. Even if it's just lyrics without a song yet. I like to write lyrics when I feel it, and because of that, I like to keep a log of lyrics all the time. I don't know if it comes time to record an album, am I going to be able to write a whole bunch of lyrics? I don't know; maybe I'm not going to have the right feelings for that. I always make sure to grab the opportunity when inspiration strikes and roll with it that way."

"You'll notice that all the super, like, major and happy and uplifting songs are written by [guitarist] Michael [Amott]. I have a hard time writing happy things. I really just don't find it that interesting for me personally to write about that. Michael's really good at it, so I can just let him do it, but when it comes to more abstract and dark kind of depths of the mind and the soul and emotions and psychology, that's where I like to go with my lyrics."

On reactions to the band's new album, "Will To Power":

Alissa: "I think that what people have to understand is a lot of people, the way that they ingest their music and their music news, is just through social media. They're in this world that doesn't really exist, but I'm in the world that does exist, and I'm in this world where I've done three or four months of promotional touring in North America, Japan, Europe, Russia, and I'm not even talking about just doing an interview, like, before a show — specifically just going to places to talk to journalists and experts in music and people whose lives and careers are dedicated to music. We do that before the album comes out, and those people have an advance listening. They're allowed to listen to it early. When we did that, all the reactions were so positive that we felt way more confident with the album. Sometimes, we'll have specially selected fans that get to come and have a listening party with us. I'm talking about meeting thousands and thousands and thousands of people, and then if you lump in the festival season when we do these really long signing sessions and we get thousands more people coming in, we meet so many people every year. Just [in] the few months since 'Will To Power' came out, we've met so many people, and everyone has been so into this album that actually, if ever I have self-doubt, it completely erases it, because these people are credible; they know music; they're dedicated to music; and they live in the real world [laughs], and I meet them face-to-face. That is really cool to me. I wish that everybody could have the opportunity to go into the real world. I know it's not always easy because some people live in places where there's, like, no festivals, or there's no music scene, or they live very far away from other people so they have to rely on social media and things like that to keep in touch. But I really, really encourage people to go and interact with like-minded individuals in person, because that's really different."

On the band choosing to cover punk songs to be used as B-sides and bonus tracks:

Alissa: "We have this sort of, like, alter-ego band where we like to do really dirty punk covers. It's funny, because I think a lot of people didn't know that 'City Baby' was a cover [of GBH], and they were like, 'Wow, that song's pretty different.' There's a lot of songs on there that are hilarious to me, but also really great. It was Sharlee [D'Angelo, bass] and Mike that came up with doing THE SHITLICKERS covers. It was always Mike and Sharlee that came up with those cover ideas. Those are really fun to record. It's hard to go from metal to punk, because it's a very different animal, but I really like it vocally because it's allowed to be just, like, out of control. Metal sounds out of control, but when it comes down to it, there's a lot of control involved, but punk is really out of control. I like it."

ARCH ENEMY recently completed a North American co-headlining tour with TRIVIUM and is currently in the midst of a European headlining tour, during which they are being supported by WINTERSUN, TRIBULATION and JINJER.

"Will To Power" was released in September via Century Media Records. Co-produced by Amott and drummer Daniel Erlandsson, the disc was mixed and mastered by longtime collaborator and friend Jens Bogren (OPETH, AT THE GATES, DIMMU BORGIR). The LP's cover artwork was designed by Alex Reisfar.

"Will To Power" marks the second ARCH ENEMY album since the departure of longtime singer Angela Gossow and addition of White-Gluz.