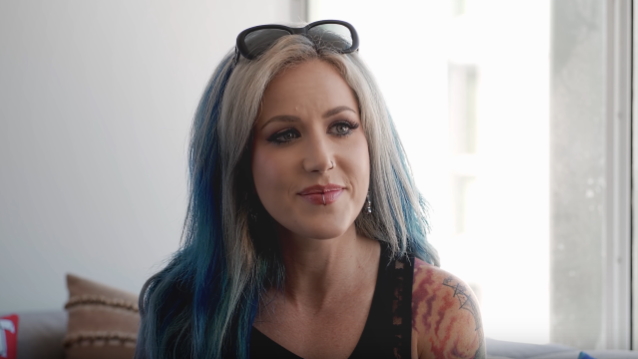 ARCH ENEMY's ALISSA WHITE-GLUZ On Her Upcoming Solo Album: 'It's A Way For Me To Get My Musical Rocks Off In Any Way That I Want'

Alissa White-Gluz says that she is "looking forward to finishing" up her long-awaited solo album.

Alissa offered an update on her solo project during a recent appearance on "The Electric Theater With Clown", the Internet show hosted by SLIPKNOT's M. Shawn "Clown" Crahan.

She said (hear audio below): "With ARCH ENEMY, I basically do screams — I'm growling; that's the type of vocals that I do. But I actually do clean vocals a lot too, and not that many people know that. I've done a lot of guest appearances with other bands and other artists where I use that clean voice, but I don't really use it that much in ARCH ENEMY. So the solo thing is kind of just giving me an outlet to do basically any type of vocal acrobatics that I wanna do, whether it be blues-style singing, which I have a guest thing coming out soon like that, which is pretty cool. Rock singing, power metal singing, opera singing… Basically, the idea is that it's a way for me to kind of get my musical rocks off in any way that I want, and it's separate from ARCH ENEMY. So I don't have to go in and dilute ARCH ENEMY or change what that's about it, 'cause that wouldn't be right either. It's basically something that I kind of just had as this ongoing project that I've been working on any time I had time off from ARCH ENEMY touring, which was basically no time until this year. So I've been working a lot on it this year and recording it at a home studio that I built. And, yeah, so far I really like it, and I'm looking forward to finishing it up."

Alissa also talked about her work with Patreon, a membership platform that connects fans directly with musicians, visual artists, writers, nonprofits and other creators they want to support.

She said: "Luckily — I'm very lucky that I have this — I have a Patreon page that I do, and that's the way that I actually am able to keep in touch with fans. I do virtual meet-and-greets every month. The kind of meet-and-greet that we would normally do in person at every show, I just get to do it in a livestream every month. And I also get to share other music ideas there, poetry, and that motivates me to keep going — keep thinking of new merch ideas, new outfit ideas, collaborations, cover songs. That really, really motivates me, and it's actually an amazing platform for artists right now, because, obviously, none of us can tour right now. And so this allows to maintain that bond with the fans and also stay motivated and stay supported by the fans so that we can keep making music and sustain ourselves until this pandemic is over. So that takes up a good chunk of my time, and I work on that."

Alissa said in a 2017 interview that the idea for a solo project came about as a suggestion from ARCH ENEMY's former lead singer Angela Gossow, who has been managing the band's career for a decade and also oversees Alissa's personal affairs.

In the Duke TV interview, Alissa also revealed that her solo album will feature contributions from former NEVERMORE guitarist Jeff Loomis, who joined ARCH ENEMY in late 2014, didn't have any of his songwriting ideas included on the latter band's latest album, 2017's "Will To Power".