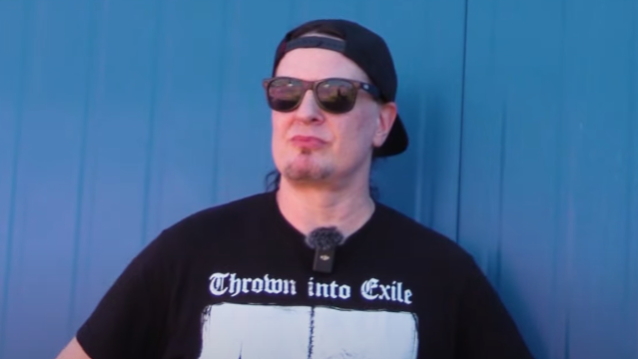 ARCH ENEMY's MICHAEL AMOTT: I've Always Been Interested In A Blend Of 'Aggression' And 'Melody'

In a new interview with Rauta, ARCH ENEMY guitarist Michael Amott was asked if he gets any inspiration to listening to newer metal bands. He responded (as transcribed by BLABBERMOUTH.NET): "I don't really listen to current metal deeply. I've had a very wide taste of music. I grew up in a kind of eclectic home. My mother is a big fan of classical music and jazz, so I kind of grew up on that first. But I'm into everything, man. If it's got a good melody…

"When you're a musician for so many years, you become a little bit jaded maybe," he continued. "If you've heard it before, you don't really connect with it. You can quickly figure out what they're doing and it's maybe not that interesting. But if somebody comes out with something that's just, 'Oh, I've never heard that…' Nowadays it's more about fusion — taking one idea, mixing it with another and adding something else. That's kind of what you have to do now.

"I grew up in a time when metal was very pure and hardcore punk was very pure," Amott added. "It was very scene based. You stayed in your lane. And I did that; I grew up with that. And if bands got a little bit more melodic, I just dropped them: 'Fuck this band. They've got melodic vocals.' I just wanted the hard, fast, heavy shit. I was like that; I was that teenager. But then you grew up a little bit, and I improved on my instrument; I became more interested in [incorporating other styles into the music]."

When the interviewer pointed out that even Amott's former band CARCASS went from playing "gore grind" in the early years to pursuing a "more melodic" sound, Michael said: "Yeah, I was a part of that a little bit, with the '[Necroticism – ]Descanting [The Insalubrious]' album and the 'Heartwork' album in the early '90s. So that was a breaking point as well, of course — melody in the death metal sound.

"With ARCH ENEMY, I'm really interested in melody, I'm really interested in riffs," he explained. "I'm very much still into classic metal — a lot of the more obscure stuff. I've listened so much to IRON MAIDEN and JUDAS PRIEST and all those kind of bands that I'm kind of done with that. I'm a record collector, a vinyl collector, I'm into all that obscure stuff that nobody's ever really heard of on a large scale. But I find some inspiration in that. And I really kind of like bad metal from the '80s. I like, basically, kids making noise, and that kind of gives me the energy. 'Cause I'm always trying to find my way back to that 15-year-old Michael Amott that's excited about metal. I surround myself in my music room with just artifacts of metal culture and punk culture and the stuff I grew up on, and I just get into that zone. And that's how I try to keep it fresh. I don't really hear something new that's out there now and go, 'Oh, that's cool. I wanna put a bit of that in ARCH ENEMY.' That never happens. It's more like everything that we've listened to, it's all inside of us and it's just a mix. And I've always been interested in this blend between aggression and heaviness with the melody and the catchiness, but not going too much on the pop side, but staying metal. It's just like a balance. It's difficult. [Laughs] It's always a challenge."