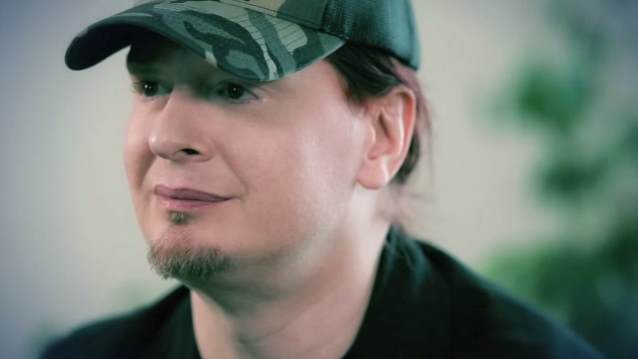 Guitarist Michael Amott of Swedish / American / Canadian metallers ARCH ENEMY spoke to GuitarWorld.com about the departure of the band's lead singer Angela Gossow and addition of Alissa White-Gluz, formerly of THE AGONIST.

"It was a very tough and emotional experience," Michael said. "It took a while to decide if we were just going to stop the band. But we realized that we still love playing and have a lot of music in us. But where would we go singer-wise?"

Amott admitted that he was concerned about how the ARCH ENEMY fans would react to such a significant lineup change, explaining: "I was worried more last year. Back when we were putting [the new ARCH ENEMY album 'War Eternal'] together, and I was sort of like, 'Okay, it's not going to be Angela singing. It's going to be this new girl.' Alissa's really great, but still, it's somebody different. Metal fans don't really take to change that well… I knew it had to be really good. We had to step it up and deliver something really special this time. So I put a lot of work into the album and the writing process. It was very very rigorous and went on for much longer than what we usually do. We did a lot of pre-production and demos. So I think at some point last year, I was thinking more like, 'Hmm, I wonder how people are going to react to this.' But once we'd done it and we'd completed the album and filmed the video and we did all the stuff, I was just ready to get the news out there. I was kind of over it. When it's done it's done...and I'm really proud of it. And the reaction has been overwhelmingly positive so far. I was expecting it to be more like 50/50, but it's been a lot more positive. [laughs]"

Asked what led Angela to leave her role as singer and focus on the band's management, Amott said: "Well, she's been managing the band since 2008. It's worked out very, very well for us. It's been a lot more successful than when we were with a professional, sort of big management company. Suddenly we were making money and everything was working out for us. She's definitely really good at that and it's something she really enjoys doing as well. As far as the actual singing part, I don't think it was an easy decision for her."

He continued: "It wasn't such a big surprise, really, when she said she finally wanted to bow out as a front person for the band and singer, because the writing has been on the wall within in our camp. But, you know, the fans really idolize her and she was a very iconic front figure and she was like the first woman in a successful metal band doing it at the level that we've done it. But it took a while for us to get our heads around what we were going to do, like, were we going to stop the band? But then we realized we actually love playing and we've still got a lot of music in us. But where would we go singer-wise? All these songs are written for a woman to sing. And are there any other woman out there who are really strong, and Alissa was the first one we thought of. But I didn't know if she'd be up for it or that she'd be interested, but when we found out that she was, that all sort of happened as well. She came over here and we did some demos with her as well and stuff like that. I have to say the first rehearsal with Alissa was really strange… She sounded so awesome, but I was thinking, like, you know, I wrote this song for Angela and now somebody else is singing it, and it just felt weird. But she sounded great. But it felt, I don't know, weird. And then I called the other guys later that evening, the other guys, original guys, Sharlee, the bass player, and Daniel, the drummer. They brought it up as well that it felt so weird. It took some getting used to. So I can understand for fans it's gonna take time for some people to get into this. The bottom line is that I think the album is fantastic, and she is… It was either continue with a new singer — and luckily we found someone totally awesome — or stop the band. And I guess we just wanted to keep playing, really."

ARCH ENEMY played its first show with Alissa White-Gluz on May 23 at Turbohalle in Bucharest, Romania. Fan-filmed video footage of the concert can be seen below.