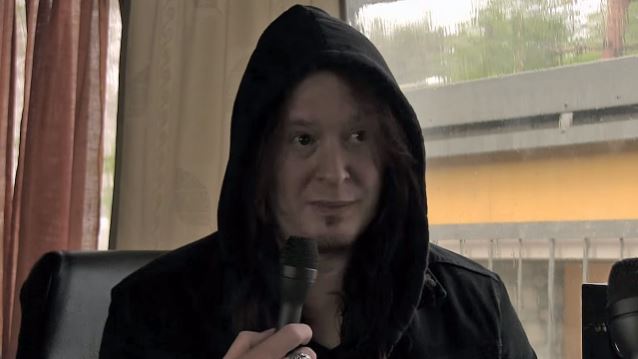 Kaaos TV conducted an interview with guitarist Michael Amott of Swedish / Canadian / American metallers ARCH ENEMY before the band's June 19 performance at the Nummirock festival in Nummijärvi, Finland. You can now watch the chat below. A couple of excerpts follow (transcribed by BLABBERMOUTH.NET).

"A new album is kind of far away for us still, at this point. We're booked all this year for touring, and we're already booking stuff for next year as well. So, realistically, we'll be working on a new album next year somtime, but we don't really know how and when and so forth."

"It's more like the writing really never stops. It's always bits and pieces, small musical cells that are created backstage and in hotel rooms, on the bus, in the bathroom… wherever. And you just kind of… My phone is already full of little fragments of ideas, little melodic things or riffs… And I think we're all doing that. Me and Jeff [Loomis, guitar] jam backstage — we have little practice amps and sort of warm up and jam — and some ideas will come out of that as well, and we record that a little bit. But there's nothing really serious yet. I did do a little demo session with Daniel [Erlandsson, drums] a couple of months ago, where I had song ideas, more like song proper song ideas, so we recorded demos of those, just me and him. But we haven't worked on something collectively as a band yet. And I think that's difficult to do on the road. Touring is pretty tough. It takes a lot of energy and focus to be good at doing that and doing good shows. But there's definitely some new ideas happening. But, you know, I really want the next album to be very, very strong, so we're taking our time. The album will be done when we've written the music. We're kind of beyond the… For a few years there, we were releasing albums every two years and touring, and it was a crazy schedule. We're touring a lot more, actually, now — longer tours. We tour for over two years on an album now, so we can't really keep that pace of releasing albums. But it seems like the band is kind of stepping up; we're becoming more of a successful live act than we've ever been before — new territories — so it just takes longer to get around the world. But that's a great thing; we love playing live. So, I think the next album has to be really good, so it'll be done when it's done. Next year, I think, is more of a time where we'll be spending more focused periods of writing and demoing and so forth, and eventually recording as well."

On whether ARCH ENEMY's new guitarist Jeff Loomis (ex-NEVERMORE) will be involved in the writing process for the next album:

"He's not in any other band at the moment, I believe. So, I mean, ARCH ENEMY is a pretty full-on thing, and it's a big commitment, time-wise, to get into. But he really loves the touring. And, you know, we've talked about writing a bit, and we will write a bit. We have done a little bit, and we're gonna do a little bit more as well, of course. We're taking it step by step. But, obviously, I'd love to have him involved in the next record. There's also Daniel that writes with me. He writes great music as well. We all kind of collaborate on music, but I've always written the lion's share of the music for the band. But, you know, I always say it's not an ARCH ENEMY song until everybody has put their touch to it; that's what makes the sound of the band. I could take my songs and play them with a totally different cast of musicians and they'd probably sound way different. So I'm very fortunate to [be able to play] with these guys. We're very much a band."

On whether he was happy with the reaction to "War Eternal":

"Absolutely. It was a much better reaction than we could ever have hoped for, I think. When an iconic lead singer [such as Angela Gossow] steps down from a band and you try to do something new, with a new singer [Alissa White-Gluz]. I mean, I was expecting a lot worse reaction — even though I knew, in my heart, that the music was really, really good and very strong, and we had a great album. But I think… you never know how people are gonna react to something. It's easy to dislike something that's changed, it's easy to not like it immediately. But I thought the initial reaction was gonna be worse, but that we were gonna win people over as time went by. But instead, actually, the band has just kind of gone straight up to the next level, it seems. I don't really know how to explain that, I don't really know why that happened, but it did, and we're very grateful for that, of course."