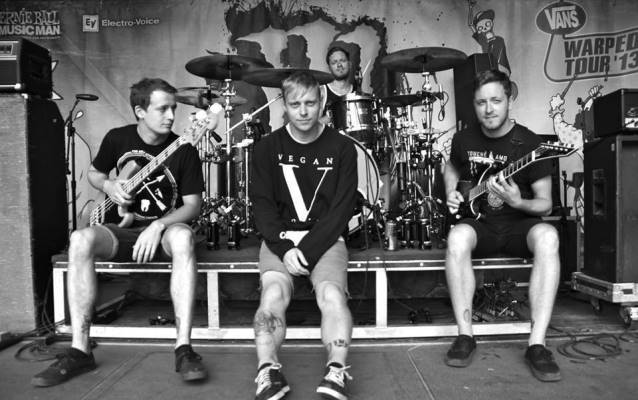 British metallers ARCHITECTS have inked a deal with Epitaph Records for the release of their new album, tentatively due next spring. The CD, which will be made available in in Australia through UNFD and in Canada via New Damage Records, is currently being recorded at Studio Fredman in Gothenburg, Sweden. The band states: "It's sounding splendid — ya gonna love it."

ARCHITECTS' latest album, "Daybreaker", was released on May 28, 2012 in Europe and June 5, 2012 in North America via Century Media Records. The follow-up to "The Here And Now" was produced by the band with John Mitchell and Ben Humphreys at Outhouse Studios (ENTER SHIKARI, YOU ME AT SIX, THE BLACKOUT, FUNERAL FOR A FRIEND, EXIT TEN, YOUR DEMISE, LOWER THAN ATLANTIS, KIDS IN GLASS HOUSES) in Reading, the same team that previously worked on ARCHITECTS' "Hollow Crown" CD. The stunning artwork was created by Paul Jackson (Tank.Axe.Love).

ARCHITECTS last year released the "The Here And Now 2012 Special Edition" including "Devil's Island" and "Untitled" as well as all video clips ("Day In Day Out", "Learn To Live", "Heartburn", "Delete, Rewind" and "An Open Letter To Myself"),making-of footage for "Learn To Live" and "Heartburn" plus several previously released online clips.