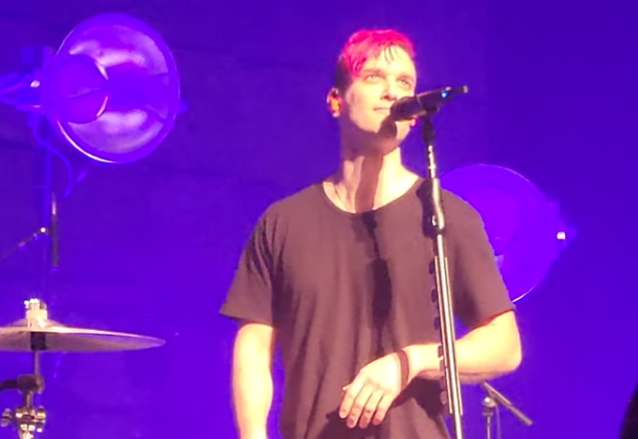 At the Dublin stop of HALESTORM's recent "An Evening With Halestorm" tour of U.K. and Ireland, drummer Arejay Hale boldly and bravely facilitated a brief stand-up comedy set during the show. He has since told Metal Wani in a new interview that he had mixed feelings about the experience.

"That wasn't my idea," he said (as transcribed by BLABBERMOUTH.NET). "I didn't wanna do it. I'll be honest with you. I was, like, 'Are you kidding me?' I was, like, 'Comedy at a rock and roll show? Nobody's gonna get it.' And our manager kept on hounding me about it, like, 'You've gotta do it, you've gotta do it!' 'Cause I did an open mic night in Nashville one time, just for fun. Everybody came out and everyone was, like dying. 'Cause that was the environment for it. Everyone was there ready to see jokes. Surprisingly, though, Dublin was the first time I tried it, and it was great. Everybody was on board. Everybody got it. They were groaning and booing, which we encouraged."

Regarding how he came up with the material for his comedy set, Arejay said: "Some of [the jokes] are ones that I've written, some of them are old classic dad jokes that I tried to revamp and apply to our music world, our HALESTORM rock and roll world. And Dublin was great. But then I tried it the next couple of nights, and I feel like a lot of the audience didn't know what was going on. So we ended up kind of pulling the plug on the stand-up set. And we kind of compromised. We were, like, instead of doing a five-to-eight-minute monologue, we'll just throw some jokes in between songs, and that's what we ended up doing. But for those of you who came to the Dublin show, you got the very rare experience of seeing a full comedy set in the middle of the show. And it was weird. [Laughs] But I had a blast doing it, and the crowd was on board; they were great. It was the perfect setting for it; it was a vey intimate setting. I loved it."

HALESTORM recently announced its summer 2022 tour featuring special guests THE PRETTY RECKLESS, THE WARNING and LILITH CZAR on select dates. Produced by Live Nation, the 16-city trek kicks off on July 8 at Michigan Lottery Amphitheatre at Freedom Hill in Detroit, making stops across the U.S. in Boston, Charlotte, Phoenix and more before wrapping up in Portsmouth at Atlantic Union Bank Pavilion on August 12.

"Back From The Dead", HALESTORM's newest full-length album, produced by Nick Raskulinecz (FOO FIGHTERS, MASTODON, ALICE IN CHAINS) with co-production by Scott Stevens (SHINEDOWN, DAUGHTRY, NEW YEARS DAY),will be available everywhere May 6. The band began writing the album pre-pandemic, but continued throughout lockdown, and the result "is the story of me carving myself out of that abyss," said HALESTORM singer Lzzy Hale. "It is a journey of navigating mental health, debauchery, survival, redemption, rediscovery, and still maintaining faith in humanity."

Lzzy and her brother Arejay formed the band in 1998 while in middle school. Guitarist Joe Hottinger joined the group in 2003, followed by bassist John Smith in 2004.