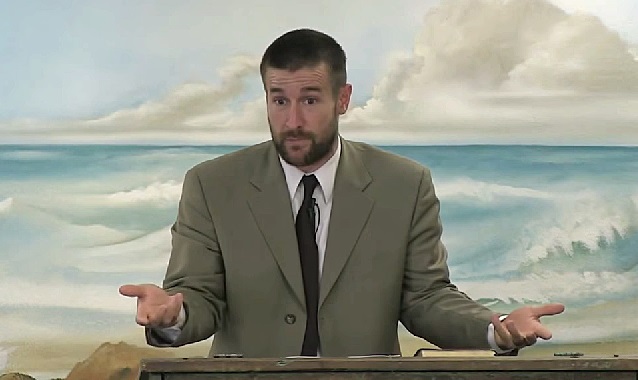 An Arizona pastor has blasted PANTERA, JUDAS PRIEST and BLACK SABBATH for being "satanic," explaining that their names are "blasphemous" of Jesus Christ.

Pastor Steven Anderson of Tempe's Faithful Word Baptist Church, who recently made headlines for reportedly claiming that "we can have an AIDS-free world by Christmas" if gays were "executed," linked the heavy metal bands to satanism in a sermon posted earlier in the year as a way of promoting his "documentary" called "Marching To Zion" which has been described as anti-Jewish.

Speaking about The Talmud, the Jewish compendium of law and tradition, Anderson said (see video below, beginning at 21:48 mark): "Let me just point out that The Talmud is blasphemous of our Lord Jesus Christ. 'Cause, keep in mind, this was written hundreds of years after Christ. Let me just give you some of the blasphemy of The Talmud. First of all, The Talmud calls Jesus 'the son of Pantera' at least eight times. So eight times it refers to Lord Jesus Christ as 'the son of Pantera.' You say, 'Well, who's Pantera?' Well, it's not the metal band from the eighties. But let me tell you something. When I'm done explaining who Pantera is, you'll realize how satanic that metal band is for calling themselves that. Why are they named that? It's blasphemous name. A lot of the rock and roll uses a lot of satanic… Look at some of the names of some of these metal [bands]… JUDAS PRIEST, BLACK SABBATH, PANTERA…"

In his book "The True Word", Greek philosopher Celsus wrote about what was apparently the consensus Jewish opinion about Jesus, saying that Jesus' father was a Roman soldier called Pantera. "Pantera" means Panther and was a fairly common name among Roman soldiers. The rumor was later repeated in The Talmud and in medieval Jewish writings where Jesus was referred to as "Yeshu ben Pantera."