San Diego metallers AS I LAY DYING have announced the "Two Decades Of Destruction" European 2022 tour. The 29-date trek will kick off in Saarbrücken, Germany on March 19 and make stops in France, Sweden, and Italy before returning to Germany for the Impericon festivals. Joining the band on the tour will be DYING FETUS and EMMURE, with select dates including FIT FOR A KING.

AS I LAY DYING singer Tim Lambesis stated: "I'm incredibly grateful to have a chance to go back out on tour and for the tremendous support we've had on the 'Shaped By Fire' touring cycle so far.

"When I started AS I LAY DYING, I never imagined we'd have a chance to travel the world as we have, and now we'll be going back to places that feel like a second home at times.

"The band has been such an important part of my life personally, so it is very meaningful to see our music connect with so many other people as well."

Added guitarist Phil Sgrosso: "It's a huge milestone for the band to reach the 20-year mark, something which couldn't have been done without the support and encouragement from our fans.

"We feel that it is our responsibility to them to keep pushing ourselves in providing better music and a better live show. That is why we are looking to go bigger than we ever have before with our stage production as well as curating a live setlist that will span and highlight pinnacle moments from the band's career.

"We are excited to return to the stage to celebrate this monumental occasion and hope to see many familiar faces in the crowd. Big thanks to Impericon for having us as this year's festival headliner as well as DYING FETUS and EMMURE for joining us on the trek."

AS I LAY DYING's "Two Decades Of Destruction" European 2022 tour dates with DYING FETUS and EMMURE:

Late last month, guitarist Nick Hipa confimed his departure from AS I LAY DYING, explaining that he can no longer justify being part of "a superficial pursuit" of the "story and meaning" that the band's 2018 reunion was built upon.

Although Hipa's exit was originally rumored in August 2020, neither he nor his bandmates had publicly spoken out about the split until he took to his Instagram on August 31 to write: "At this point though, it has been well over a year since I have distanced myself from [AS I LAY DYING] on a personal and professional level. In that time they have only given fans merchandising posts and show announcements. This sort of activity highlights and reinforces our differences.

"Respectfully, I left because the story and meaning we built our reunion upon decayed considerably over time. What primarily endures is a superficial pursuit I cannot justify supporting or being part of. This is not an indictment on any who choose to remain or be involved. There is tremendous good that can be accomplished through singular focus on the power of music. However to my memory and recent experience, it comes at the cost of tolerating behavior which at times mistreats, disrespects, and hurts other people. I do not have it in me to walk that road again.

"The talent and unshakeable ambition of the band is undeniable. They will continue to release successful music and do great business. On a human level, I hope everything else fares well for them." 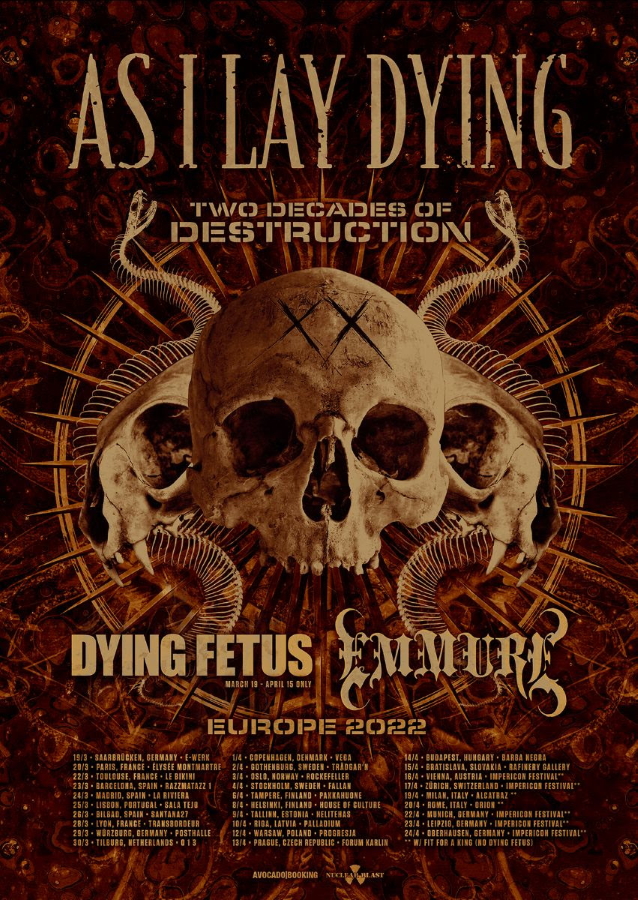