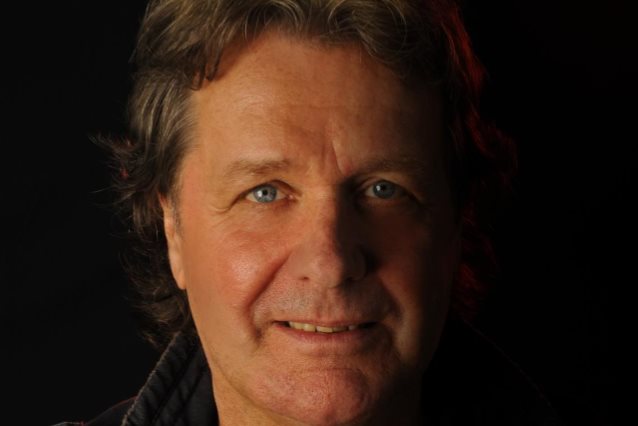 Rock music legend John Wetton sadly passed away in the early hours of this morning (Tuesday, January 31) after a long and courageous battle against colon cancer.

John rose to fame with KING CRIMSON in the early '70s during the iconic "Red" era and later formed the band UK. In the early 1980s, he was a founder member of supergroup ASIA which was his biggest commercial success. The band's 1982 self-titled debut album was the biggest-selling album in the world that year and gave fans and mainstream radio the mega-hit "Heat Of The Moment".

John had been planning to tour with ASIA for the band's forthcoming U.S. arena tour with JOURNEY and, following the success of his solo "Studio Recordings Anthology", to continue working on the ongoing re-issue program of his solo albums, via his own Primary Purpose label.

John valued his over 11 years of sobriety and volunteered time in fellowship with other alcoholics to share his experience, strength and hope with them.

The very last studio song of Wetton's career was the closing track on the most recent and indeed final ASIA album "Gravitas" and included the profound lyrics "Think the best of me, 'till we meet again."

Downes said in a statement: "It is with great sadness and a heavy heart that I have to report we have lost my dearest friend, brother, bandmate and long term musical collaborator John Wetton, who has passed away after a long and tenacious battle with cancer. He will be remembered as one of the world's finest musical talents, and I for one of many was wholly blessed by his influence. It was a massive privilege for me to have worked with this genius so closely on our numerous projects together over the years. His bass playing was revolutionary. His voice was from the gods. His compositions — out of this world. His sense of melody and harmony — unreal. He was literally a 'special one'.

"But John was much more than a gigantic and unique musical talent. He was a supremely intelligent man, marked with his great observations and wisdom about life; all couched within his wicked sense of humor. The wit was dark and deep, only fully perceptible to those on his same wavelength. I was fortunate enough to be able to be on that wavelength, and discover that we had much in common. Many of his personal life experiences were reflected in his lyrical contributions to the songs. His heart was always in the music. That was John, through and through. It was always about — the music.

"As a person, he was fiercely loyal, loving and generous, particularly to those he cared about. But he could be as stubborn as a mule or as gracious as a nobleman, depending on the mood that grabbed him on any particular day. There were some who couldn't read his brilliant mind and complex personality. Some found him charming, others infuriating. But however you found John, there was no denying his rare talent as a musician and songwriter was second to none.

"Both of us having been brought up with similar backgrounds in provincial England, we shared a love of many things — sport, and in particular — football, English church music, current affairs, comedy, literature, you name it.... pretty much everything that two kids from the sticks were exposed to in our youth.

"Our planets seemed to be immediately in alignment when we first met in early 1981. There was a laddish camaraderie that grew between us as we became as close as two non-related brothers could be. He was an avid reader and film enthusiast, something he pursued with great interest. This helped inspire him to some wonderful lyrics to the literally hundreds of songs we composed together. Back then, we immediately hit the ground running as we composed much of the debut ASIA album together and forged a formidable partnership which lasted right up until now. It was a wholly natural process for us, whereby we could knock out two or three songs in an afternoon. They were always greeted with our gentlemanly handshake and smiles once we had wrapped up another one in the bag.

"Above all else though, his passion for life was to the fore. The battles he endured throughout were immense and well documented. Firstly with alcohol, which he so resolutely overcame, then open heart surgery and finally cancer, which sadly was to take his life in the end. He once observed to me that this disease is a 'merciless assassin.' Just another example of his perception and the descriptive language that he was so richly blessed with. He took all of these battles on board with great bravery and almost a 'laissez-faire' attitude, tinged with his inimitable wry wit.

"To say I will miss my him greatly is beyond understatement. He was such an inspiration to me. We were planning another album, but sadly he was not well enough to complete it. I feel heartbroken about this, as I knew John thought it was to be one of our finest albums to date. I remain as proud as ever of our Wetton/Downes writing partnership. I am hoping one day that I will be able to finish it, and that it will be appreciated by all those who loved his and our music, and most importantly, a legacy he would have been proud of.

"Life will not be the same without him. And words are not really enough to describe the loss I feel right now, and the many friends and fans all over the World will also be feeling. It is the end of an era for all of us. But we will soldier on — the music of John Wetton needs to be heard loud and clear from the rooftops.

"Dearest John, may you rest in peace, brother."

Added Wetton's ASIA bandmate Carl Palmer: "With the passing of my good friend and musical collaborator John Wetton, the world loses yet another musical giant. John was a gentle person who created some of the most lasting melodies and lyrics in modern popular music. As a musician, he was both brave and innovative, with a voice that took the music of ASIA to the top of the charts around the world. His ability to triumph over alcohol abuse made him an inspiration to many who have also fought that battle. For those of us who knew him and worked with him, his valiant struggle against cancer was a further inspiration. I will miss his talent, his sense of humor and his infectious smile. May you ride easy, my old friend."

Dear All, I am sorry to be the bearer of the very sad news that my dearest friend, bandmate and co-writer, John Wetton has passed away.

We regret to announce that iconic singer, John Wetton, passed away in his sleep this morning.