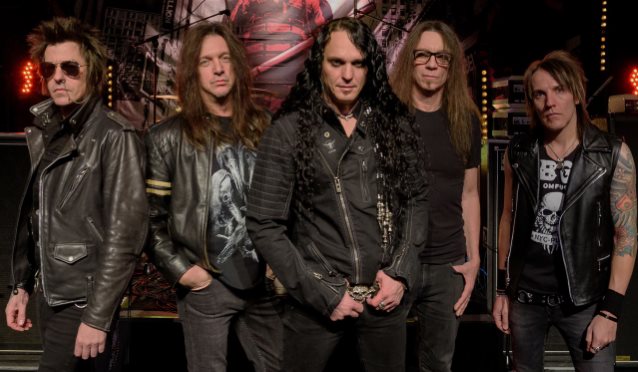 SKID ROW bassist Rachel Bolan told Billboard in a 2014 interview that the group was surprised and gratified to see fans buying into the EP concept and starting "sectors" of the Damnation Army all over the world. "We came up with this idea of United World Rebellion, and it's united a lot of people together," Bolan said. "Someone in Finland would start the street team, then Japan, New York — we're watching them all come to life in front of us, and the common thread is SKID ROW. We'll see fans from Italy who invite fans from Brazil to hang out because they've started sectors and started communicating with each other through social media. It's like, 'Wow, we're bringing our fans from different parts of the world together,' so the United part is really working. It's just a really cool thing."

Bolan added that the EPs allow SKID ROW to keep a steady flow of new music coming. "It's a really awesome way of doing things for us being that we don't live down the street from each other anymore, or even in the same state," he explained. "I think it's cool for our fans. In a day of information overflow to have five songs, you don't have to commit to a whole, long album. Creatively, it keeps things fresh; we're out there playing more and giving our fans more new music more often. This is a band that can get lazy really quick, so this keeps you on your toes. If you take six years between albums, you can get complacent sometimes. We really like working in short bursts like this."

Despite having played sporadic shows with SKID ROW for a year, Theart wasn't officially announced as the band's new frontman until earlier this month.

Theart said in a statement: "[SKID ROW's] music was the soundtrack to the largest part of my younger years and many a crazy adventure. Now I get the chance to re-live all of them for a hour and a half every night! I am beyond honored to be given this opportunity. Think I'm a bit jealous of my actual self."

Theart's involvement with SKID ROW was exclusively reported by BLABBERMOUTH.NET on December 31, 2015. He stepped into the group following the departure of Tony Harnell, the TNT frontman who joined SKID ROW in April 2015 as the replacement for Johnny Solinger, the band's singer for fifteen years.

SKID ROW guitarist Dave "Snake" Sabo told News-Press.com that Theart has been doing a great job on the road.

"He's come in," the guitarist said, "and he's a really great source of positive energy. He knew all of our songs coming in, and he knew them well. He started singing the crap out of all of them, and we were all very impressed."