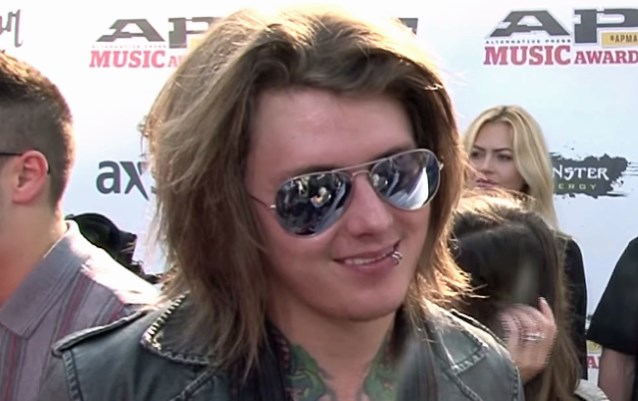 ASKING ALEXANDRIA Guitarist BEN BRUCE: 'This Is The Start Of A Whole New Chapter'

On Thursday, Danny announced he was leaving ASKING ALEXANDRIA after eight years and will now concentrate on his other band WE ARE HARLOT. Worsnop issued a statement in which he said, "Over the last eight years together, we've done some amazing things and created something truly special. I now, same as then, want what's best for the band and at this point in time, that isn't me. ASKING ALEXANDRIA will continue to tour throughout the year and will be working on a new album."

ASKING ALEXANDRIA guitarist Ben Bruce wrote at the band's Facebook page, "It's with heavy heart that I must announce, yet I am sure comes as no surprise to you all, that Danny has decided to leave ASKING ALEXANDRIA to pursue other musical interests.

"Before you lose your composure and think this is the end, I would like to say that myself, James, Cam and Sam have all been in this since day one. We love ASKING ALEXANDRIA and we love every single fan/AAFamily member around the world.

"As with any family, there are ups and downs. There are good times and hard times. A family is there to support you and help you in your darkest hours. We have been and always will be there for you guys and just this once we ask for you guys to help us out. Be our strength and our shoulder to lean on.

"ASKING ALEXANDRIA will not be slowing down. We are going to tour harder than ever and we are going to write the greatest record of our career.

"We are extremely excited to announce that we will be spending all summer touring the European festival circuit and across North America on the Vans Warped Tour with our new singer, playing a set list for the fans.

"We know you are here for us and we know this might seem like a scary time for us all, but we will be fine. We will stand tall and prove to the world that ASKING ALEXANDRIA is bigger than just one person. It's bigger than just myself, James, Cam and Sam.

"ASKING ALEXANDRIA is a family made up of the most dedicated fans around the globe and nothing and no one can hold us down.

"This isn't the end, this is the start of a whole new chapter. This is where we come together and make history.

"We want to thank the key people who have stood by us: Ash Avildsen and Sumerian Records, Kevin Lyman and Warped Tour, our management team Kyle, Diony and everyone at 5B, and most importantly YOU reading this. Yes, you, because without you, ASKING ALEXANDRIA would not be possible.

"I cannot wait to share our new songs with you and I'm so SO excited to get back on the road and see you all again. Stay tuned to find out who the new singer of ASKING ALEXANDRIA is."

Worsnop's departure comes just days after it was announced that WE ARE HARLOT will release its self-titled debut album on March 31.

Worsnop admitted last year to Kerrang! magazine that his involvement with WE ARE HARLOT had caused some friction with the members of ASKING ALEXANDRIA, saying, "Back when it started, there were maybe concerns and stress and bitterness from the guys. But over time they've realized that it's not detrimental to ASKING in any way."

"Moving On", the latest single from ASKING ALEXANDRIA's 2013 album "From Death To Destiny", is No. 8 on the rock radio chart.