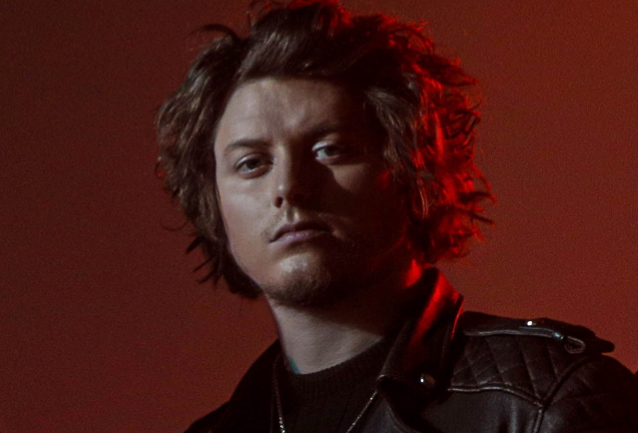 ASKING ALEXANDRIA's BEN BRUCE: 'I Was Really In A Dark Place For A Very, Very Long Time'

ASKING ALEXANDRIA guitarist Ben Bruce has confirmed to "Whiplash", the KLOS radio show hosted by Full Metal Jackie, that the group's sixth outing, "Like A House On Fire", is the first album he and his bandmates have ever written sober.

"I didn't think I was gonna have anything interesting to say," Ben said about not being under the influence during the writing of the LP. "It's so stupid — it sounds ridiculous — but I kind of thought without it, I'd lost my superpowers. And I was really worried that I was gonna go in the studio and not have anything to write about and not have any way to get anything out that people might wanna listen to.

"I was really in a dark place for a very, very long time," he revealed. "And I attributed a lot of those negative feelings to being able to write songs that people can relate to. Because people go through shit; life is hard, no matter what age you are. It's not easy when you're a kid. People go, 'I wish I was a kid again.' It's not easy for kids, and it's not easy for adults, and it's not easy for teens. Life's hard, and so I thought, when I was sad, 'Oh, I'm writing songs they relate to. Everyone's sad.' And I was really scared that, once I stopped doing drugs and everything, I wouldn't be able to write sad songs anymore. And the thing is I realized very quickly when I was in the studio and I was sober and I wasn't taking copious amounts of drugs and stuff is that those experiences that I had that made me sad, they never went away — they're gonna be part of my life forever — but I just have a fresh perspective on them. Now I can kind of, rather than keep myself in that deep, dark hole, I can look back at those times and reflect on them."

Bruce added: "I took a different approach on this record, and I thought, okay, well, maybe I can show people how to get through those dark times, or show people that those dark times are inevitable; they're gonna happen. But as corny as it sounds, there is always light at the end of the tunnel. So once I got in there and started writing and realized, I can still write, and I do still have stuff to say, all my worries kind of went away. But they definitely were there to begin with. It was a scary time, for sure. I kind of put off going to the studio for a while, because I was worried I wouldn't be able to do it anymore."

"Like A House On Fire" was released in May 2019 via Sumerian Records. The LP was once again recorded by producer Matt Good (HOLLYWOOD UNDEAD, FROM FIRST TO LAST),who also helmed 2017's self-titled effort. The disc was recorded throughout 2019 in between a high-profile arena tour supporting SHINEDOWN and a direct support slot on the road with PAPA ROACH.