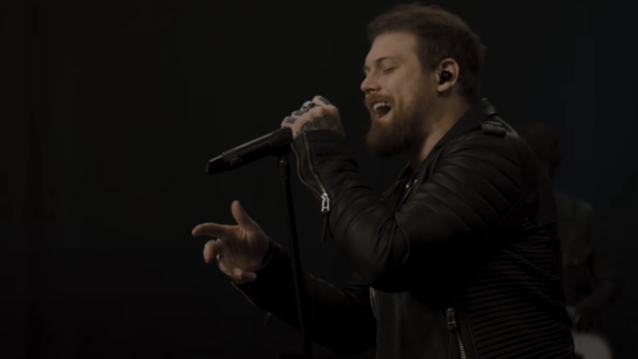 ASKING ALEXANDRIA has canceled the remaining shows on its U.S. tour with NOTHING MORE because singer Danny Worsnop is suffering from a severe throat infection.

Earlier today (Wednesday, June 1),the British rockers issued the following statement via social media: "To all of our AAFamily, as youre aware by now, we have had to miss the last few shows of our tour because Danny has suffered from a severe throat infection. Today, we all woke up early in anticipation of receiving news from a voice specialist in Nashville. Unfortunately, the news we received was not the news we were hoping for and we have been told that Danny cannot sing for the next few weeks and needs to remain on vocal rest. Obviously this means we will not be able to continue on with our North American tour and it breaks our hearts to have to say that. Whilst Danny recovers we will be working diligently to book a new tour so that we can get back out there and see you all again.

"@nothingmoremusic @atreyuofficial and @evaunderfire will be continuing the tour without us, however If you would like a refund please do so from your point of purchase. Once again, we are sorry, we love you."

Last month, ASKING ALEXANDRIA released a new version of its song "Faded Out", featuring a guest appearance by Sharon Den Adel of WITHIN TEMPTATION.

"Faded Out" will appear on the soundtrack of "The Retaliators", a Better Noise film coming this fall.

ASKING ALEXANDRIA recently released its "Never Gonna Learn" EP, titled after the second single off its acclaimed fall 2021 album "See What's On The Inside", in addition to a new song with Maria Brink from IN THIS MOMENT.

"See What's On The Inside" debuted on Spotify's top 10 in both the U.S. and the U.K. upon release.

ASKING ALEXANDRIA ended 2021 by celebrating its first-ever No. 1 at U.S. active rock radio with "Alone Again". The song had the biggest first streaming day and week in the band's history and was a fitting first offering from its latest album.