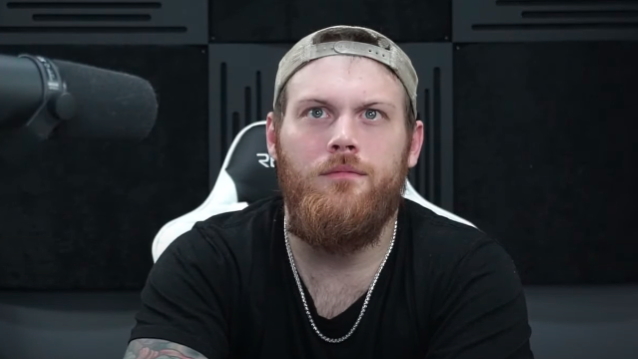 Capricia Productions games studio has announced that ASKING ALEXANDRIA's Danny Worsnop has joined the game "Of Bird And Cage", which is currently under development. The frontman will be performing the vocal parts for the character Ari, who is in a romantic relationship with the game's protagonist Gitta, voiced by Kobra Paige from KOBRA AND THE LOTUS.

"Of Bird And Cage" is the first rock/metal album completely produced as a story-driven narrative video game and it aspires to establish a new gaming genre of interactive musicals. The project features an array of other well-known musicians like Ron "Bumblefoot" Thal (ex-GUNS N' ROSES),Rob Van Der Loo (EPICA),Ruud Jolie (WITHIN TEMPTATION),Mike LePond (SYMPHONY X),Rocky Gray (ex-EVANESCENCE),and many others.

Worsnop's vocal parts have already been recorded and Capricia's development team believes the singer has introduced a whole new level of complexity to the character — which is one of the most challenging roles within the game.

"It was an absolute honor to work with Danny," says Arnold Nesis, Capricia's CEO and music composer/producer. "He is a professional, and he understood that in this case, he was not just singing a 'normal' vocal line, but voicing a complicated character, who already has his own personality and voice. We believe Danny not only captured Ari perfectly, but also added his own personality to the character and made him even more interesting."

Regarding his participation, Worsnop says: "We've had a lot of fun making this — it's an entirely new approach, an entirely new concept, and a way to absorb the video game platform that I believe you guys are going to enjoy. There are a lot of incredible other musicians who've been involved in the casting, the creation, the scoring, and the performance within this video game and I would just want to say thank you to all of them who've been involved, and thank you to everyone who has created 'Of Bird And Cage' for having me on board."

While there is no official release date for "Of Bird And Cage" yet, Capricia can reveal that the game is coming very soon and they are planning to make it available no later than early 2021.

Gamers can already wishlist "Of Bird And Cage" on Steam. The game will also be available on Xbox, PlayStation and Switch.