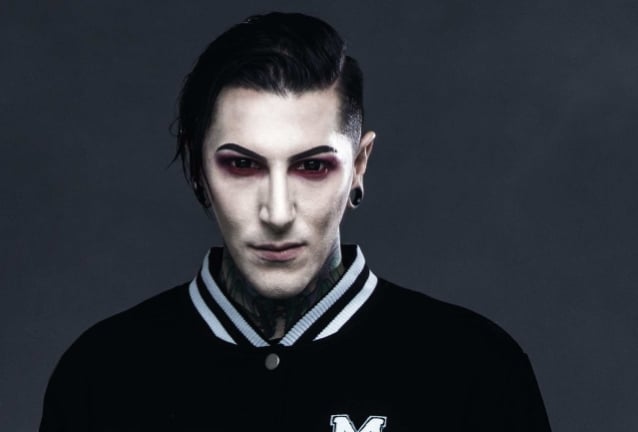 MOTIONLESS IN WHITE Frontman: 'I've Been In Therapy Most Of This Year'

MOTIONLESS IN WHITE frontman Chris "Motionless" Cerulli says that he has spent most of this year in therapy in order to help him deal with "so many personal issues" he has resisted confronting for a long time.

Two days ago, Cerulli tweeted that his "mental health" was "on a serious decline this year" as a result of not being able to tour due to the coronavirus pandemic. He added that he felt "worthless" because he was unable to perform for fans and had so much time to "sit in [his] head and obsess over regrets and self-hatred."

Chris's tweet was met with an "overwhelming amount of support" from fans and peers, which led him to return to the social media platform and "expand on what 280 characters did not grant" him the ability to say.

Cerulli wrote: "First and foremost, Thank you so much to everyone from friends, fans, artists/band members, and more who reached out to me to show their support and words of encouragement. I was not expecting that at all, and in all of the ugliness I am experiencing, that was a beautiful and inspiring thing to see. I can't thank you enough for the help.

"Moving on, I'd like to establish that I am aware that so many people in the world are having experiences that far outweigh the severity of my own. I feel so bad for families who have been forced to juggle all of the factors that have fallen on them unexpectedly. For people who have had the rug completely pulled out from under them with no certainty of when this will end. I did not mean to come off like I was taking that away from anyone. However, with mental health being something that people are being rightfully more and more open about, I felt comfortable to express my feelings to people that I know are directly relating. To encourage further discussion about a topic that in its increasing notoriety.. still somehow unjustly seems taboo.

"I stated that I feel worthless due to not touring. I will be honest in that it has frequently been a crutch to help distract myself or have a crucial outlet from personal mental issues, and that I do occasionally find myself tethering my happiness to what is taking place within that realm exclusively, much to the detriment of other areas of my life. However, I said what I said not because my sense of self worth is directly dictated by being enjoyed by our fans, not because who Chris Cerulli is doesn't exist without the association of the band, but because it is the primary balance I experience on the opposite side of my life long path of creating and experiencing highs and lows. Much like the same release people receive from attending a live performance. It is a feeling and an energy that has the power to shift mountains. To elaborate further on where this is coming from, for the entirety of this year I have been dealing with so many personal issues I have resisted confronting for a long time, but fronted by 2 overlying aspects that took place this year that have been deteriorating as each month has passed, 1 of which being the loss of touring and having to reshape my life around not having the balance I just described. In addition to that, at the beginning of this month, I came face to face with a memento (from the other non band related aspect) that I know would seem very small and probably be regarded as laughable by most people but of severe significance to me, And as a result, Those 2 situations avalanched on me more than they already were, with no solution in sight except potentially the solace of time.

"I've been in therapy most of this year, and it has lead to monumental moments of self discovery, reprogramming of my lifestyle, and pivotal life changes that I've implemented to improve my quality of living. Despite these improvements, there is sadly no amount of therapy or self exploration that can supplement the feeling of simply doing what I love, and more importantly, it certainly cannot rectify regrets that are irreversible. All my progress has lead me to a point of a line in the sand in which I simply cannot cross. What once was another side of that line full of moments of incredible purpose and happiness that could have extended far beyond the life span of my career... is now a self-inflicted abyss with simply no solid ground for me to step foot on (holy dramatic! Sorry. Yo should I use these as lyrics? *extreme eye roll*) Throughout this year, we have also been working on writing new music and some additional MIW related projects that I am very proud of, but where this creativity usually fills most of whatever voids are present, it has not been as effective and I've been met with such a feeling of being lost in not knowing how to handle these very emotions I have been describing when there is seemingly NOTHING i can do about it except, as I said, to rely on the passing of time as my only remedy.

"At the risk of sounding like a self help meme, If so many of the comments I received about being a person that many look to for release are true, let this letter be a catalyst to spark your own personal journey to confronting destructive thoughts and patterns in your life, or at least to be open to talk about them. Fuck the fear of speaking out about how you feel, fuck your toxic masculinity, and fuck the idea that someone's status should determine if someone is 'allowed' to be in pain. You can have all the money and fame in the world, but that can't buy you true love or a true connection with people around you. It can't buy back relationships and friendships. If you can try and tell me you're not dealing with something that if handled could promote a better quality of your life, then I am calling you a fucking liar. On the positive side, though the 2 aspects of my year that I mentioned feeling lost about are still weighing on me, almost every other aspect in only 5 months have drastically improved as a result of the effort I'm putting in. There's nothing we could have done/can do about the coronavirus downtime regarding working, but there is everything we can do to pursue a better life for ourselves from within. I implore you to seek help and be open about your feelings before you dig yourself a hole so deep it feels easier to bury yourself than to climb out. Good luck."

Three weeks ago, Cerulli lambasted President Donald Trump for his performance as the head of state and head of government of the United States of America, saying Trump's "behavior and poor acts of 'leadership' enable cruelty, ignorance, and social injustice."

Cerulli made his comments after several days of protests in cities across America following the killing of George Floyd, an unarmed black man, at the hands of Minneapolis police.

Late last month, Cerulli confirmed to Zippo Encore that he has been working on more aggressive material for the follow-up to MOTIONLESS IN WHITE's "Disguise" album. "Everything that I've been doing so far has been way heavier — probably because I'm so angry about missing all these tours and everything [due to the coronavirus pandemic]," he said. "But whatever happens happens — I'm just writing to write it and get some more in the bank."

In response to the overwhelming amount of support I received regarding my last post about my mental health, I’d like to expand on what 280 characters did not grant me the ability to say. Read below. pic.twitter.com/qZ1AwVDT6H