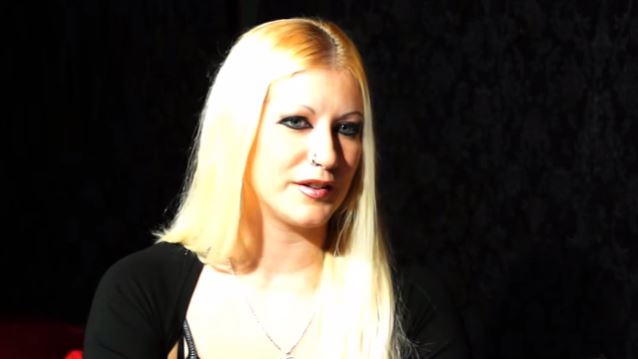 "Blackdemonium", the sixth full-length album from the Greek black metal band ASTARTE, will tentatively see the light of day in early 2015. The mixing process and the mastering will be handled by Steve Lado, "an excellent professional producer and close friend" of ASTARTE vocalist Maria Kolokouri (pictured),better known as Tristessa, who died in early August from complications of leukemia. Additional work on the drums will be done at Made In Hell Studio and David. The cover artwork was created by Maggot Meister, who has previously worked with 1349, AMON AMARTH, CHILDREN OF BODOM, HIRAX and MORTIIS, among others.

ASTARTE's fifth CD, "Demonized", was released in 2007 via Avantgarde Music.

Asked in an interview what "Astarte" stood for an what the band's goals were, Tristessa said: "Astarte is the great goddess of fertility, beauty and war. She is the Phoenician predecessor to the Greek Aphrodite. Her counterparts are well known to all of us, for instance to the Sumerians, she was known as Innanna, to the Babylonians as Ishtar, and so forth. She was associated with the moon and called Mother of the Universe, so her background fits to the Greek pagan spirit."

She added: "Our goal is to create the absolute personal music style and to show that music and generally art belongs to everybody. The world of art welcome all those who have feelings, imagination and creativity and each one shall take what he or she deserves."

In a 2007 interview with Metal-Rules.com, Tristessa said about the songwriting process for ASTARTE: "First of all, I need to have some conditions that will help me to start composing music. My mind needs to be in total self control and sadness is very helping factor to transform my thoughts into the music.

"I record my ideas to a small console that I have in my bedroom. Once I gather a lot of ideas (hours of riffing ideas),I choose and unify them, to find the metronomes and to make a skeleton of a song. Then is the right time to meet the band and to enrich my riffs in order to work on final formation/skeleton of every song.

"For the aggressive songs, we gave emphasis to the guitars to be more aggressive, riffings are not so melodic and drums are faster and raw and straight in your face.

"I have to use everything, I cannot exclude something or to put limits.

"Sometimes I feel that my riffs are not into black or death and I feel that I play another kind of music, but even at that time, I have the flexibility to transform every idea into black/death.

"I am very good at making a simple melody into a real composition and to preview the role of every instrument.

"The most important, for me, is how clever you can translate an idea into a good riff."