AT THE GATES Announces New Album 'The Nightmare Of Being'

Swedish melodic death metal pioneers AT THE GATES have completed recording their new studio album, "The Nightmare Of Being", for a July 2 release via Century Media Records.

AT THE GATES vocalist Tomas Lindberg checked in with the following comment about the album's concept: "The overall theme deals with the topic of pessimism, and I have been diving deep down in pessimistic philosophers. Trying to understand this way of looking at the world. It is not a negative album, more a gateway into new ideas for me personally, trying out different perspectives. You could call the album an introduction to pessimism as a concept, I guess. It is a very dark album, but not negative…"

And musically, while "The Nightmare Of Being" unveils a newly liberated and adventurous AT THE GATES via some of the bravest and most mesmerizing material they have ever written, Lindberg adds: "It still sounds like AT THE GATES, 100 percent. It is just more of everything…"

"The Nightmare Of Being" track listing:

01. Spectre of Extinction
02. The Paradox
03. The Nightmare of Being
04. Garden of Cyrus
05. Touched by the White Hands of Death
06. The Fall into Time
07. Cult of Salvation
08. The Abstract Enthroned
09. Cosmic Pessimism
10. Eternal Winter of Reason

Speaking to MessedUp Magazine, Lindberg stated about the upcoming effort: "We were very excited about [2014's] 'At War With Reality' already before it was released, because it represented our comeback. No one was as excited about it as us, but some time later, I thought it was too slick, too well-produced. 'To Drink From the Night Itself' was a response to that and we wanted it to be dirty and gritty and have loads of classic death metal sounds on it, like a lot of reverb on the vocals and that stuff. It was a record for old-school fans. The upcoming album is somewhere in between, something that continues on the concept we started on the two previous albums where we incorporated much more of our proggy, krauty and avant-gardist influences. Just to give you the picture of how it sounds; one song goes by the nickname 'the Goblin song,' another we call 'the Neu song.' But I promise you we don't take it too far — people wouldn't listen to it if we did. [Laughs] When we were in the studio, we told Jens Bogren [producer] to keep the gritty sound and the attack from the last record and put the overall sound in between the comeback records. And it sounds awesome.

"When we did the Roadburn festival two years ago we did a special set with guest vocalists and string instruments and that stuff on stage and played songs we never played live before. All that was very inspiring because we realized we can do it today, the things we thought we could do as teenagers when we wanted to be the KING CRIMSON of death metal [laughs], but we weren't good enough. After the Roadburn gig, we talked about incorporating more of those elements on record.

"Let's say we're super excited about how people will receive the record because there's stuff on the album never heard on an AT THE GATES record before — a lot of weird things. [Laughs] For old fans, there's at least five or six classic AT THE GATES songs on it, but it's a quite diverse album.

"AT THE GATES have been around for such a long time by now that we don't need to release records to please someone else — we want to do things we like ourselves. It's still death metal, but it has evolved. We just want it to sell enough to get money to record the next album. [Laughs] "

AT THE GATES guitarist Jonas Stålhammar recently told Italy's Poisoned Rock about the music he and his bandmates have written for the upcoming effort: "It's kind of progressing even more from the last album. It's gonna be different than that one too, but still you know it's AT THE GATES. It's evolving even more. All of us are kind of on the same page with why should we do the same record over and over again."

"To Drink From The Night Itself" was produced with Russ Russell (NAPALM DEATH, THE HAUNTED, DIMMU BORGIR) at Parlour Studios in the U.K. The follow-up 2014's "At War With Reality" featured conceptual artwork created by Costin Chioreanu of Twilight13Media, who also worked with AT THE GATES on the band's previous disc.

"To Drink From The Night Itself" was the first AT THE GATES album written and recorded without lead guitarist/primary songwriter Anders Björler, who departed in 2017. He has since been replaced by Stålhammar.

Further details about "The Nightmare Of Being" and its various formats will be revealed on April 30, with the start of the album’s pre-order campaign.

AT THE GATES is:

Above photo by Ester Segarra 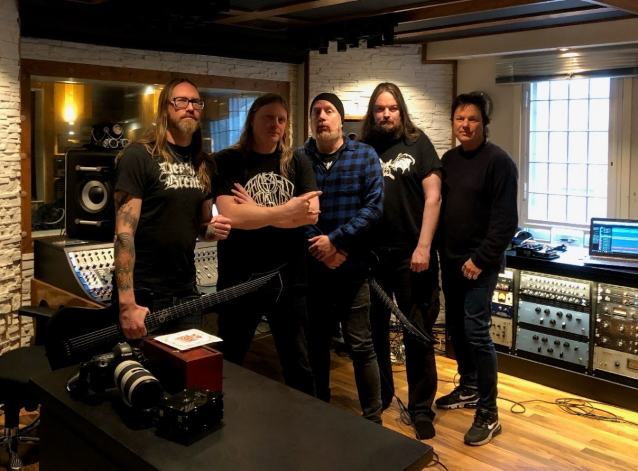