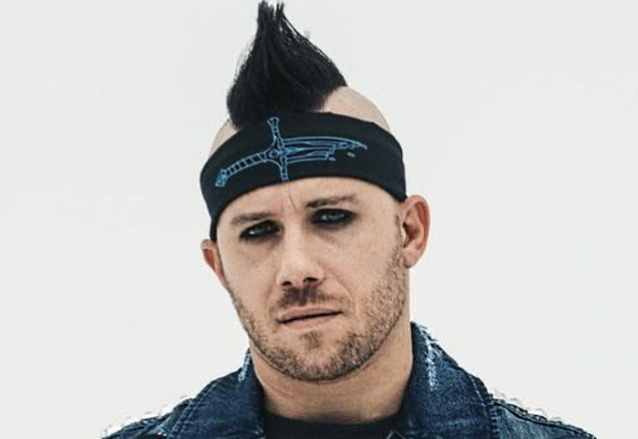 ATREYU's DAN JACOBS On METALLICA: 'They're The Kings Of Metal'

In a new interview with RadioactiveMike Z, host of the 96.7 KCAL-FM radio program "Wired In The Empire", ATREYU guitarist Dan Jacobs discussed his love for METALLICA. He said (as transcribed by BLABBERMOUTH.NET) : "We've played with them a couple of times — always at a festival, though; there's never been a METALLICA/ATREYU tour.

"They're the kings of metal — of rock and metal — they're just the biggest thing there is. So getting to experience that and see how they roll, it's really inspiring for any band, especially in the rock world. I mean, you watch what they do, and you're just, like, 'Holy crap, man.'

"When you're that big, you just have the best show; your show is so ridiculous," he continued. "It's so over the top in the most awesome, epic way. They still sound just as good [as], if not better than, they ever have. I mean, those dudes are just ripping at what they do. James Hetfield is an animal. It's a great experience. There's a reason why they're as big as they are and they have been as successful as they have. They're the real deal. You will not go to a METALLICA show and be let down."

Asked how he first discovered METALLICA's music, Dan said: "The first METALLICA I ever heard was 'Enter Sandman' back in the '90s. It was kind of around the time that I was just getting introduced to… I guess kind of really paying attention to music more than I ever have. I started watching MTV. Before, music was something in passing I'd hear on the radio. I sought it out a little bit. But this was the age when I was, like, 12 or 13 years old, and I was really pursuing music and really just obsessed with it at that point. So, I remember watching MTV or VH1 and METALLICA's 'Enter Sandman' would come on every once in a while. I liked it — it wasn't something that I super fell in love with, but I knew it was a great song [and it had] a huge sound, with the drums and the guitars and everything. It wasn't exactly in line with what I was listening to at the time; I was kind of a little bit more drawn to the punk world… As far as the mainstream — THE OFFSPRING and GREEN DAY and RANCID, which kind of led me down way more into the punk world, which then led me into the hardcore bands, which then led me into metal, which was kind of around high school time. That's when I kind of came back around and started listening to METALLICA a little bit more, especially a song like 'Battery'. I think that's probably the most standout song that kind of resonated with me as far as listening to quote-unquote older METALLICA… Out of all the METALLICA songs that are older, that one just, for whatever reason, sticks to my head the most."

ATREYU has just dropped a new album, "Baptize", via Spinefarm Records. The effort marks ATREYU's first release since the departure of vocalist Alex Varkatzas last September. The LP showcases ATREYU's current lineup consisting of Brandon Saller focusing completely on singing after previously sharing lead vocals with Varkatzas for most of the band's two-decade-plus existence. Sitting behind the kit is Saller's HELL OR HIGHWATER bandmate Kyle Rosa, who had filled in for Saller on drums in 2019 after Varkatzas bowed out of the band's European tour while dealing with serious back and hernia issues.