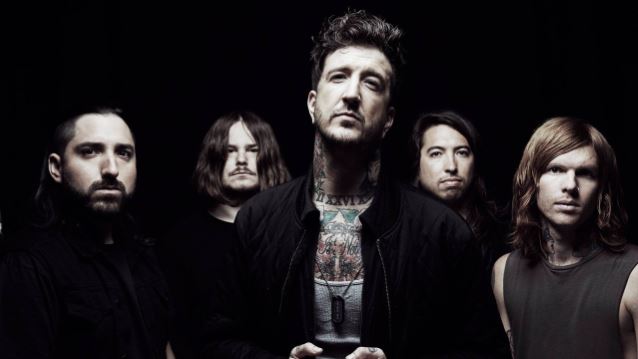 "It's with heavy hearts that we announce Austin's departure from the band for reasons pertaining to his health.

"As many of you are aware, Austin suffers from a rare connective tissue disorder called Marfan syndrome and has been struggling with the physical demands of touring since the band began. After his most recent series of surgeries at Stanford University Hospital, following the cancellation of our European headlining tour, his team of doctors informed him of the damage that performing, and more specifically his aggressive vocals, have been causing his body. They warned that if he were to continue on doing so, it would cause permanent and irrevocable damage to his spine and nervous system.

"Following the advice from his team of specialists, Austin decided it best that he step away from the band and change his lifestyle to better his health.

"Though we're heartbroken that he can no longer continue, his health has always been of utmost importance to us and we support him now in this decision and are proud of his perseverance over the years.

"We've had an amazing and unforgettable past few years making music and touring the world together, and the four of us look forward to sharing the next chapter of the band's story with you.

"All previously announced shows will proceed as planned, and we thank you for your continued love and support. We couldn't do this without all of you! See you real soon."

Austin Carlile, the vocalist and founding member of California's OF MICE & MEN, has left the band.

The singer, who suffers from Marfan Syndrome (which affects his connective tissue and causes weakness in his heart, lungs, ears, joints and muscles) and is now unable to scream as a result of his longstanding health issues, said, "I realized that I had to step away from OF MICE & MEN."

In a lengthy, emotional statement, he also paid tribute to those who have supported, or been involved with, OF MICE & MEN from the start, including the four remaining members of the group, who he says will carry on as a quartet.

"The first time I ever left the States was because of this band that I started in a tiny barred window studio apartment... I never thought people would ask to take selfies with me inside the Roman Collesium, on the Eiffel Tower in Paris, or even the mall I worked at in Ohio where OF MICE & MEN was born eight years ago with the help of my friends in THOUGH SHE WROTE. Kameron Bradbury now in BEARTOOTH on guitar, recording our first song together in a local studio for just $50. I never thought putting the song 'Seven Thousand Miles For What' on MySpace would reach over a million plays in a week, and that I'd sign a record contract of my own just days later. I never thought i‘d pack my things up and drive to California for the first time to find permanent band members. I never thought all my wildest dreams and more would eventually come true...

"I also never thought my fibrostic connective tissue disorder marfan syndrome would cause touring to be so hard and painful for me. I always thought the pain would get better one day, or that i would get better too. But this never happened; that day has still yet to come. From multiple surgeries, caused from touring over multiple years, and after cancelling a European tour halfway through, this October 2016 finally brought me to my knees. My greatest fear had become a reality... I had three tears in my dual sac surrounding my spinal cord, and we discovered that every time I would push down to scream, spinal fluid would rush though the tears which was causing me the violent pain every time I'd perform. It was causing my muscles to seize up, and body to contort on stage, and making me lethargic and sore every hour of the day.

"My doctors and team of specialists had warned me for years of the detriment of my career to my health, but I pushed through anyways. I always pushed through. I had to push through. This is what I love, music is where i found myself. But these three tears in my spine, plus a fourth that occurred the year prior, were signs that i was absolutely not able to scream anymore. My team advised me that if I continued to do so, it would cause 'permanent and irrevocable damage to my spinal cord and nervous system.' After learning this, I realized that I had to step away from OF MICE & MEN. No longer able to scream most of our old material, or continue to scream on anything new, I cannot continue on.

"This has been the hardest thing that has happened in my life for a very long time, but thankfully the band, my family, and closest friends stand behind me and understand. They have all personally seen how much pain I have had to endure and especially the past two years as my spine was tearing apart but I kept going, I gave it my all, and cannot express this enough.

"The band will now still continue on just the four of them, and I wish them the best of luck without me heading into 2017.

"I will be here in Costa Rica, where I have now moved, continuing to heal, rest, and write.

"I will not stop playing music. I am still able to sing and I'm hungry for what is next to come even though I have no idea what that may be.

"I feel God placed me at this crossroads for a reason, and with the closing of one door, another will open. I'm taking this as an opportunity to grow closer to him, as he is the reason I never gave up or ended my life years ago while facing my various troubles.

"I have decided to listen to my specialists, and God telling me it's time to do something new. I have to do this for myself, my health, my body.

"I'm so thankful my spinal injuries weren't worse, for I could have easily been paralyzed permenantly.

"I have now made the choice to use my life, my story, and my voice for his glory. To help show his love and grace I have experienced firsthand to anyone else searching for the same hope.

"OF MICE & MEN offered hope to thousands, but there is no true hope unless through Jesus Christ (yashua). I have now dedicated my life to sharing this with the world, which needs it so badly right now more than ever.

"Some ask how I am not mad at God for taking ali. This from me and putting me through so much pain and loss... My answer is simple: it is my path to follow, my story, and my life is not my own, but a gift from god in the first place.

"This seems like the perfect opportunity for me to use my story to hopefully inspire others who have experienced pain, hurt, depression or loss in their own lives.

"We all have our stories, we all have certain things we have overcome. We have done this together, you helped make my dreams come true, and I want to thank you all for the immense support over the years. Now I must do what i have to.

"Remember, your days are like pages, chapters unread, you have to keep going, keep turning, keep reading... Because your book has no end. Just like the ampersand tattoo on my thumb, we will not fade.

"You are in my heart and I‘m ready to start a new journey with all of you remaining by my side. I can do nothing alone, and I'm grateful I won't have to because of you.

"Thank you. To everyone who has ever been a fan or a part of OF MICE & MEN, from the start, Kameron, Joey, Luke, Ethan, Jared, Jaxin, Phil, Aaron, Joel, Justin, Jon, Shayley, Tino, and Alan, for everything, thank you. Here's to 2017.

My heart is heavy... I never thought I would be writing this... Wanted to leave this announcement in the mess that is 2016... pic.twitter.com/T02QIt2hUp