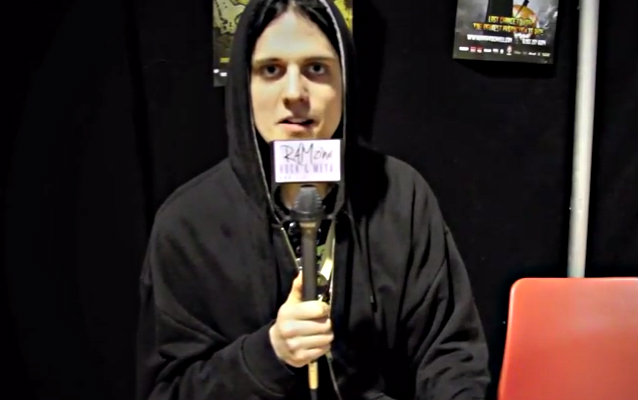 On March 15, RAMzine conducted an interview with Swedish metallers AVATAR at this year's Hammerfest, which was held at Hafan y Mor Holiday Park, Caernarfonshire and Merionethshire, Wales. You can now watch the chat below.

AVATAR's new album, "Hail The Apocalypse", will be released on May 16 via Gain Music in Europe and May 13 through eOne in USA. The CD was recorded in Karma Sound Studios, Bang Saray, Thailand, mixed by Jay Ruston (STONE SOUR, ANTHRAX, STEEL PANTHER) and mastered by Paul Logus (VOLBEAT, CLUTCH, KILLSWITCH ENGAGE).

Vocalist Johannes Eckerström comments on the "Hail The Apocalypse" video, which can be seen below: "This is our best video to date. I play your friendly neighborhood doomsday prophet. You get to follow me facing the unbelievers and their reactions when chaos ensues. Good times all around and we are using some really amazing special effects to blow up the planet. Oh, and it's done like a silent movie."

The visually stimulating "Hail The Apocalypse" album cover has also been reveled. It vividly depicts the band steering their ship through a storm on the open sea with the apocalypse happening all around them. They're facing it, riding the waves and taking on whatever comes their way. To the band, it symbolizes the time in the darkness that made these songs.

The biggest break through came when AVENGED SEVENFOLD personally picked AVATAR as support band on their sold-out arena tour in Europe late 2013. AVATAR got a reception far beyond expected by the crowds, which resulted in bookings on high profiled festivals such as Download festival and Rock On The Range in 2014, among own headline dates of which most are soon sold out.