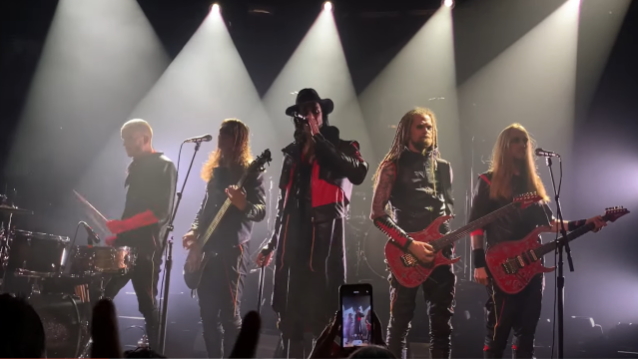 Swedish metallers AVATAR have released a new song, "Valley Of Disease". The track is taken from the band's upcoming album which was recently recorded and mixed for an early 2023 release.

AVATAR vocalist Johannes Eckerström comments on "Valley Of Disease": "There is a sickness, a stranger, and a harmful way. A twisted landscape untouched by the sun. I leave the rest up to either you or me, but never both at the same time. You can only enter this place alone, and my path isn't yours. Your secret is safe with me, but so is mine."

Last year, AVATAR announced its signing to Thirty Tigers and the launch of its own Black Waltz Records imprint. In addition, Eckerström and his bandmates unleashed four new songs which, according to the group, represent a taste of things to come.

"My best thing to liken it to is [JUDAS PRIEST's] 'British Steel' in the sense of that… JUDAS PRIEST were always great, and before 'British Steel' you had 'Killing Machine', you had 'Sad Wings Of Destiny' and all this, but they were a great heavy metal band, a great rock and roll band, a great prog band at times and kind of eclectic. And then with 'British Steel' I find they really got laser focused, cut off the fat. And we're focused on what we feel right now metal needs — this very pompous but yet…

AVATAR enjoyed quite a productive summer, traipsing North America on a successful headline tour. They next embarked on some of the biggest shows of the career — a trek with IRON MAIDEN, supporting the band in stadiums in Brazil. AVATAR also played arenas supporting SABATON. They secured slots at major festivals globally — Inkcarceration, Summer Breeze and Bloodstock Open Air, among others.