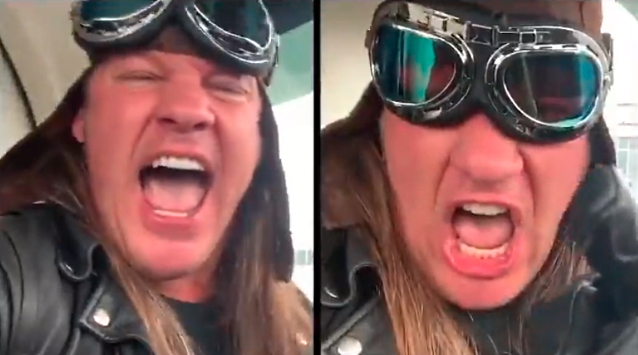 Asked in a recent interview with Rock 95 if it was true that Alice Cooper himself is involved with THE WHEELBLOCKS, Jericho said: "Well, that's not quite true. It's kind of still under wraps. But it's another supergroup. If [Jericho's other side project] KUARANTINE is the worst supergroup ever, I'd have to say THE WHEELBLOCKS is a lot more star power in that one. And Alice Cooper is not involved, but a prominent member of his band is involved. It's probably the second most recognizable person from that band, if you've seen Alice Cooper live over the last three or four years."

Jericho is also a member of another rock "supergroup", the aforementioned KUARANTINE, which performs cover versions of songs from the non-makeup era of KISS. That band has released two singles so far, "Heart Of Chrome" and "No No No", via Madison Records with distribution by The Orchard. Jericho is joined in KUARANTINE by drummer Kent Slucher (LUKE BRYAN),guitarist Joe McGinness (KLASSIK '78) and bassist PJ Farley (TRIXTER).

Quarantine jam?? Don’t mind if we do ✈️
Get ready to fly with me, @IAmJericho, @DemmelitionMH, Johnny Christ, and my @thejoshv! Aces High cover and video premiere Thursday 8/6 on @loudwirepic.twitter.com/aIj3KZ3glE