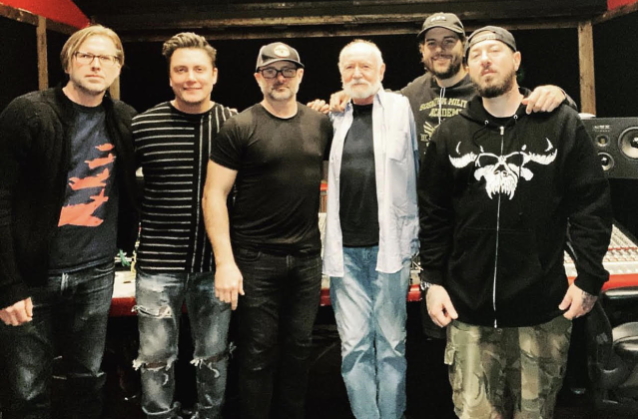 AVENGED SEVENFOLD has completed mixing the long-awaited follow-up to 2016's "The Stage" album.

Earlier today (Thursday, September 29),AVENGED SEVENFOLD drummer Brooks Wackerman took to his Instagram to share a photo of him and his bandmates with legendary producer Andy Wallace, who mixed the group's new LP. He captioned the picture simply "done!"

Wallace has mixed all of AVENGED SEVENFOLD's studio albums since 2005's "City Of Evil". Last year, AVENGED SEVENFOLD singer M. Shadows told the 93X radio station that Wallace is "favorite mixer ever." He explained: "We usually hand him so many tracks, and then when we get it back… None of our records sound the same; he's not putting it through the Andy Wallace lens. He's giving us what we want but he's allowing you to hear everything we've given him. So you can kind of sit there and go, 'If I wanna listen to the bass, I can hear it. If I wanna listen to that third guitar, I can hear it.' He does such a great job of making things sound big and full but also with all the layers; you can hear every layer. So, to me, he's just so important every time. He's my favorite."

This past April, AVENGED SEVENFOLD bassist Johnny Christ said during an episode of his Internet TV show "Drinks With Johnny" that he and his bandmates "had a lot of delays" making the new album, "for a lot of different reasons. We'll go into it at a later date and we'll be letting all the fans know. But it's just delays, and then adding COVID to some of those delays… We're a pretty intricate band. The delays were already there, and [COVID] just made it a little longer.'

He continued: "Finishing the record to the caliber that we have created… A lot of string arrangements, a lot of different things that you need — players to come in on, and they're all part of a union and stuff, and they have different new protocols of how… 'Oh, if we wanna do a full orchestra, we've gotta do these three guys and then these three guys.' We were, like, 'Nope. We're just gonna wait until we can get the whole fucking thing together. Let's do it right.' … And that's just one of the delays. There's a few others.

In February, M. Shadows said that the band's new album was "90 percent done" after the band was able to get a 78-piece orchestra to record its parts for the LP. A month earlier, M. Shadows told Metal Hammer that the band would complete the mixing of its eighth studio album by March. "The record's been recorded for a year, but we haven't been able to put the real strings on it, because we couldn't fly out to Prague," he said. "When an orchestra have to social distance and they aren't sitting next to each other, they can get out of tune, and we have just finally got to a place where we can use this 70-piece orchestra as we intended."

Regarding the musical direction of the follow-up to "The Stage", M. Shadows said: "There are so many influences… We're very influenced by Kanye West. The thing about Kanye is that he is pulling from such great soul music. I didn't grow up with that stuff — my dad listened to BOSTON and Alice Cooper [and] I didn't get that taste of black music and old soul. So, diving deep into jazz musicians… We're not trying to do a jazz record, but the chord changes and progressions are so eye-opening to us."