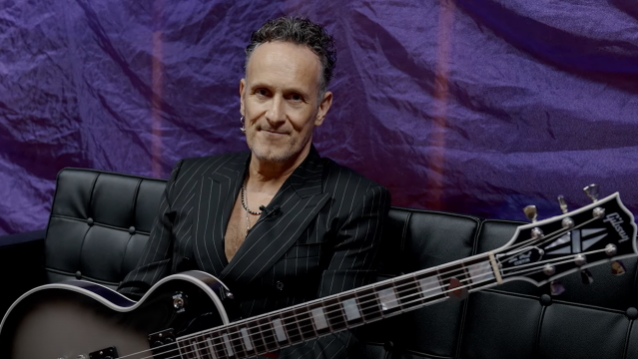 Vivian Campbell says that naming his side project after a DIO song has been "both a blessing and a curse."

Campbell, who has spent the last four months touring with DEF LEPPARD as part of "The Stadium Tour", discussed LAST IN LINE in a new interview with Ultimate Classic Rock. He said: "Naming the band LAST IN LINE was a good idea at the time, 'cause we were just gonna go out and play some of the [DIO] songs from the early albums, and we didn't have any ambitions to take this beyond that. Now that we're on the eve of releasing album number three, having that association is both a blessing and a curse.

"We'll always have that element — we're named after a DIO song, after all — and I think it's perfectly legitimate for Vinny [Appice, drums] and I to play those songs," he continued. "We're the only surviving members of the original band. But it's inevitable that we'll play slightly less of the classic DIO catalog and ... find a balance to where we can incorporate enough of the new music and represent that and enough of the DIO catalog from those first three records."

The current DEF LEPPARD guitarist, along with Appice and late bassist Jimmy Bain, was part of DIO's first incarnation, which reunited in 2012 alongside singer Andrew Freeman to form LAST IN LINE.

LAST IN LINE takes its name from the second DIO album released in 1984. Appice, Campbell and Bain were Ronnie James Dio's co-conspirators and co-writers on the "Holy Diver", "The Last In Line" and "Sacred Heart" albums — the records that defined the classic early DIO sound and have gone on to become part of rock history.

Back in 2016, Vivian dismissed comparisons between LAST IN LINE and DIO DISCIPLES, which is made up of former members of DIO, along with a rotating lineup of singers, including former JUDAS PRIEST frontman Tim "Ripper" Owens. The guitarist, who had an acrimonious split with Ronnie in the mid-1980s, told All That Shreds: "When we started doing the LAST IN LINE project, I had to go to extremes sometimes to sort of explain to people the difference between us and the DIO DISCIPLES. DIO DISCIPLES are a tribute band. No one in that band was part of the original DIO band — no one. Not one person. Where on LAST IN LINE, you had 75 percent of the original DIO band.

He continued: "It's technically incorrect to refer to LAST IN LINE as a tribute band. We cannot be a tribute band because we are the original DIO members. The band superseded all that. Once we started writing and recording music, it became something very, very different."

Vivian told BigMusicGeek.com that he didn't know about DIO DISCIPLES' existence until 2012, almost two years after the band first started playing shows as a tribute to Ronnie. "It was around the time that [LAST IN LINE] got together to jam that I had first heard of the DIO DISCIPLES," the guitarist said. "I wasn't even aware of them. It was actually Vinny who told me. I couldn't believe that these guys were going out and playing songs that we actually wrote with Ronnie. I thought, 'Well, if they're doing it, then why shouldn't we do it?' With us, there is a legitimacy to what were doing, ya know? I doubt that there is a real legitimacy in the DIO DISCIPLES."

Asked a few years ago by "Totally Driven Radio" what Ronnie's widow/manager Wendy Dio's reaction has been to LAST IN LINE, Vinny responded: "Well, she's not involved in this in any way, shape or form. I don't know… I haven't really talked to her and asked what she thought. So she's not involved in this. I don't really know what she thinks about it. She probably hates it. I don't know. But you know? We're out there pushing everything — pushing the old songs, then keeping everything alive too. So you can't knock that."

Campbell told Billboard that Wendy has nothing to do with, and no love for, LAST IN LINE. "Vinny still has occasional contact with her," Campbell said, "and when we first started doing this project, she said something along the lines of, 'Ronnie would be spinning in his grave.' So there you go."