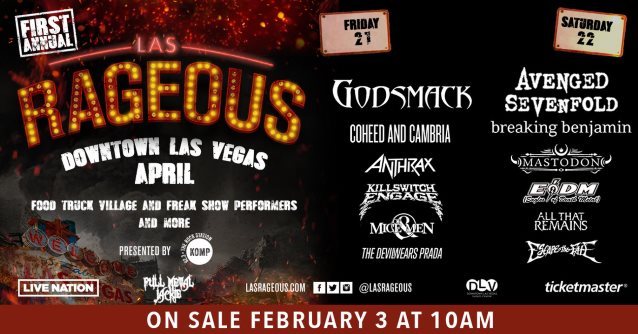 Charlie Benante of ANTHRAX stated: "We are looking forward to playing the Las Rageous festival, planning on making this first-time festival memorable."

Benjamin Burnley of BREAKING BENJAMIN said: "We're really excited to be a part of Las Rageous in April. We love playing Vegas and are looking forward to being a part of this new festival."

Amanda Moore of Live Nation explained: "Bringing an annual rock festival to this city has been a dream ever since we opened the Live Nation Las Vegas office. Rock and metal music have a rich history here in Sin City; from the bands it has fostered, to its wild and loyal fans, to KOMP — one of the oldest and most respected rock stations in the country."

The lineup for Las Rageous is as follows:

With only 10,000 tickets available for purchase, Las Rageous offers the rare opportunity for fans to enjoy a festival experience in an intimate outdoor setting. Located just off Las Vegas Boulevard at Third and Carson Streets, Las Rageous will take over two city blocks of the historic downtown area.

All ages are welcome and doors open at 4 p.m., with headliners taking the stage at approximately 10 p.m. The festival will also feature a collection of wandering freak show performers, a KOMP-sponsored showcase of local rock and metal bands, and a Vegas scene foodie-focused Food Truck Village.

Pre-sale tickets will be available Thursday, February 2 from 10 a.m. to 10 p.m. PT. Pre-sale passwords can be obtained by signing up for the Las Rageous email list at LasRageous.com or from radio partner KOMP-FM.

All tickets available for purchase are two-day festival tickets for both Friday and Saturday.

An initial allotment of two-day festival tickets will be available for $99 each, for a limited time only. Fans are encouraged to purchase their tickets early, as the specially-priced $99 tickets are expected to sell out quickly. VIP tickets are also available and include private viewing from a platform and onsite parking.