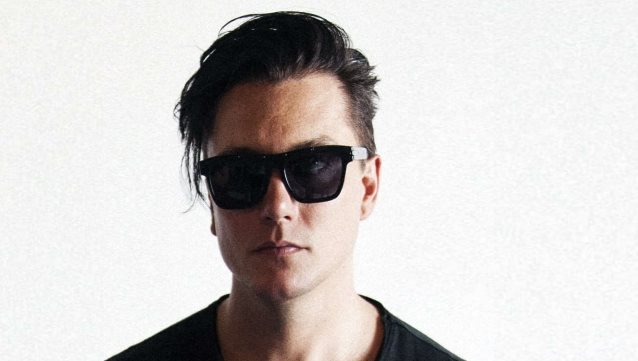 AVENGED SEVENFOLD guitarist Synyster Gates was recently interviewed by Meltdown of Detroit's WRIF radio station. You can now listen to the chat using the audio player below.

Asked for his thoughts about JUDAS PRIEST guitarist Glenn Tipton, who recently announced that he was retiring from the road due to his battle with Parkinson's disease, Gates said: "Yeah, it's really, really sad. But I think they just have to find a new position in the band for him. It's not like he's done and out of the mix; I mean, they're still gonna make music together. He's the heart and soul of the band and such a great player. So they'll figure it out. It's heartbreaking, but life goes on. And it's really cool that they're not moving on from him — they're just continuing on. So I love it."

Tipton, who is now 70 and has appeared on every PRIEST album since the band's 1974's debut set, "Rocka Rolla", is not quitting the band, but simply cannot handle the rigorous challenges of performing live. Joining PRIEST for its upcoming dates will be the band's co-producer and HELL/ex-SABBAT guitarist Andy Sneap.

AVENGED SEVENFOLD will hit the road in North America this summer on its "End Of The World" tour, which will bring the headliners out with PROPHETS OF RAGE and THREE DAYS GRACE as special guests. While AVENGED SEVENFOLD has had a reputation over the years as leaning more to the right on the political scale, singer M. Shadows told The Pulse Of Radio that he feels comfortable sharing a stage with the very left-leaning PROPHETS. "I think they're a little further left than I am," he said. "I like to stay down the middle on a lot of things, but I definitely lean in their direction. I think when we were younger we didn't, and a lot of it was just us being antagonistic towards the political bands that were on Warped Tour. I definitely find myself, you know, agreeing with a lot of their stances, but I think sometimes they go a little further than I would go."

This will be AVENGED SEVENFOLD's second major North American road trip in support of its 2016 album, "The Stage".

The AVENGED tour kicks off on July 22 in Mansfield, Massachusetts and Shadows told Billboard that he "wouldn't be surprised" if some jams take place involving the members of all three acts.

Shadows also said that AVENGED has "upgraded" the stage production it used on its European tour, explaining, "We're just gonna bring everything and try to put together a cohesive rock show."

A deluxe edition of "The Stage" arrived in December, featuring seven additional studio songs plus four previously unreleased live tracks recorded during shows at the O2 Arena in London.