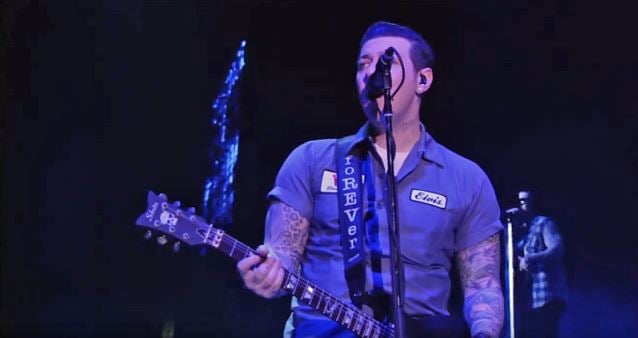 In a brand new interview with The Irish Times, AVENGED SEVENFOLD guitarist Zacky Vengeance was asked how the words "President Donald Trump" sound to him, as an American. He responded: "It's a very scary phrase. Time will tell, but all I can hope for is that Americans and people across the entire world, aside from whoever is the president, do right by each other. Because, at the end of the day, all my relationships here with people from all places of the world, only I can influence those today and tomorrow. It is really up to me. That guy [Trump] can do what he pleases, but as long as the majority of people stick together and try and be good people to each other, then I think all of that will be irrelevant."

AVENGED SEVENFOLD last fall released a t-shirt featuring the band's Deathbat mascot posing at a presidential podium and gripping the decapitated skulls of Hillary Clinton and Donald Trump in each claw. AVENGED SEVENFOLD shared a picture of the t-shirt design on Instagram and Facebook. "Since the election is right around the corner, we decided to throw our hat in the ring! T-shirt only available on tour," they wrote.

While many rock artists had been against Trump, artists like STAIND's Aaron Lewis, Kid Rock and FIVE FINGER DEATH PUNCH's Zoltan Bathory had thrown their support behind the real estate magnate, who has no previous governing experience.