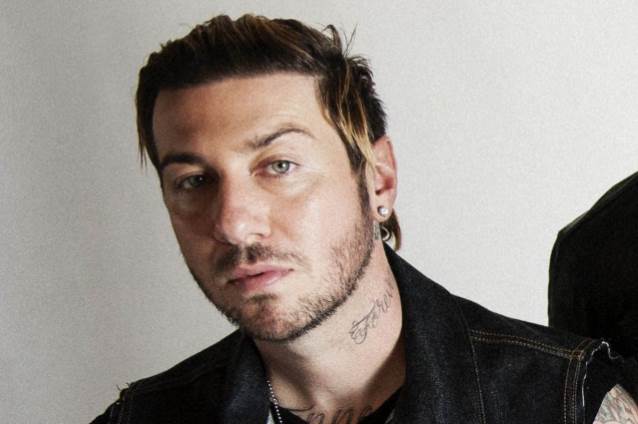 AVENGED SEVENFOLD Guitarist: 'We Leave It All On The Stage'

AVENGED SEVENFOLD guitarist Zacky Vengeance spoke with Sophie K of Kerrang! Radio prior to the band's performance at this year's Download festival, which took place last weekend at Donington Park in Leicestershire, England. The full conversation can be seen below. A few excerpts follow (as transcribed by BLABBERMOUTH.NET).

Zacky: "That's honestly a testament to our fans. I know everyone says that, but the truth is, we have never had mainstream success. We have never had that huge, smash hit song that crossed over on to mainstream radio or television or ended up in the tabloid magazines. Our culture was not part of that — we had to kick and claw our way up from the smallest clubs, along with our fans. Headlining Download the first time, we were subject to, 'Is this band capable of headlining? Should they be doing it?' The fact that we're doing it for a second time means that we did it right the first time, [and that] we've proved that we were able to. We're happy to be here. A lot less nerves this time around. It's really about celebrating with all our fans out there, and hopefully any of the doubters will maybe end up giving it another shot."

On getting nervous before such performances:

Zacky: "You could put us in front of any amount of people, but Download's a special crowd, because our fans in the U.K. have been subject to some of the greatest bands in history, so they don't take anything lightly. You're playing for a group of fans that have ultimately been raised by parents that grew up with THE BEATLES and THE ROLLING STONES, and the list goes on forever, because music's so big here, and some of the greatest bands in history are British bands. They're a tough crowd. This crowd, you have to win over. They play hard to get. They're not easy, and they don't expect anything less than the best a band has to offer."

Zacky: "You really just have to visualize in your head when you were a kid growing up, and you're dreaming about doing this, what are the most ridiculous things that you can get away with doing, and you just do it. You say, 'Hey, can we do this?' They say, 'That's not even possible.' You say, 'Okay, let's figure out a way to make it happen.' You always have to save a little bit for the next time you come back, but we definitely leave it all on the stage when it comes to performing. These fans deserve a great show, and we have the competition from the bands that have headlined this historically is very steep. What a dream come true to get up there and blow stuff up and run around making loud noises."

On his creative input behind the scenes:

Zacky: "I get inspired by my bandmates. I see where their heads are at — maybe somebody comes up with an idea for a song, or [vocalist M. Shadows] comes up with some lyrics that I'm really intrigued by, and something will just come into my head. I'll get a vision, and then I'll work toward making it a reality, like 'The Stage' music video. I saw his lyrics, and I loved the lyrics, and I was like, 'Man, this is so cool. I have this crazy idea — and everyone's going to laugh at it — but let me run wild with it.' They're like, 'Okay, we trust you.' Obviously, when you say the words 'heavy metal puppet show,' depicting history, inspired by a scene from 'The Sound Of Music', everyone's like, 'What is wrong with this guy?' I'm like, 'Trust me — it's going to be awesome.' I'm really, really proud of that."

On the band embracing a rapidly changing music industry:

Zacky: "We put out our last album as a surprise release with a nine-and-a-half-minute first single... make music that you love. Make it as exciting as you can, as best as you can. Do the art the way that you want to do it. Release it however you want to do it — release it directly to your fans, give it away for free, charge a million dollars for it. Do whatever you want to do, but don't worry about being mainstream. We're at such an exciting time in music. With streaming, we could come up with a song today and release it directly to our fans. As long as our fans embrace technology and that ability and aren't totally gutted over the fact that there's not a physical release... just mix it up. Do things differently. I think it's truly a really exciting time for rock and metal bands, provided they get out of the old head space of feeling like you have to take three years [or] four years to record an album, and you have to tour for a cycle, and you have to hit up markets and all that b.s. Make music because you love to do it. Make art because you love to do it. Release it however you want to do it. Play as loud as you want; play even until they kick you off the stage. Just have fun doing it. If it works, then it was destined to work, and if it doesn't, have fucking fun doing it."