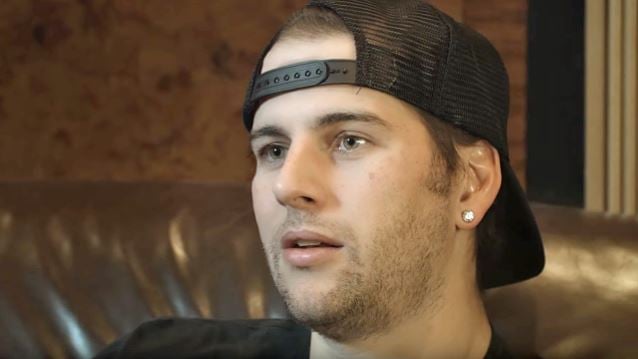 AVENGED SEVENFOLD Singer On 'The Stage' Album's Surprise Release: 'I Don't Know If It Was The Greatest Plan In The World'

AVENGED SEVENFOLD singer M. Shadows was interviewed on the May 7 edition of "Whiplash", the KLOS radio show hosted by Full Metal Jackie. You can now listen to the chat using the widget below.

Asked how the surprise release of AVENGED SEVENFOLD's latest album, "The Stage", has made the band rethink the way they will release music in the future, M. Shadows said: "We're just trying to figure out new ways to get music to people, to excite the fanbase. Also, people have shorter attention spans now with the way information comes and goes so quickly on the Internet. We're just trying to figure out the puzzle. And one thing that we really didn't wanna do was be months out [from the album release] and just keep releasing singles and really just getting on people's nerves with all the promotion. So this was just another way to do it. I don't know if it was the greatest plan in the world, but I know it was a plan, and it was different, and it was exciting to us. But I just talked to a few radio stations today and there's radio DJs that got [the] 'God Damn' [single] for the first time, and they're, like, 'Yeah, so the new record's coming out, huh?' And I go, 'No. The record came out four months ago. And they're, like, 'Really? Why are we just getting a single now?' So there's a lot of explaining to do, I guess. Part of this METALLICA tour is gonna be us getting in front of the people and making our case for, 'Hey, this is a cool record and you should check it out.' Or that it exists at all."

M. Shadows also spoke about the evolution of the AVENGED SEVENFOLD sound and the band's songwriting approach on "The Stage". "For us, I think as we've grown older, we've done a more streamlined approach to our rock and roll, I guess you'd say, and as the band has grown older, we've kind of tapped into some of our more 'artsier' sides of metal," he said. "We've been listening to a lot of TOOL, GOJIRA, MASTODON… those types of bands. Also, going back to the FAITH NO MOREs and the SOUNDGARDENs of the '90 and ALICE IN CHAINS, there was just something more cerebral about that stuff, and it really, I guess, turned us on for this record. It was exciting to us to kind of maybe write in AVENGED SEVENFOLD style but take some of those melodic ideas and make something a little more cerebral and something you need to think about. So, for us, it was just about going where we needed to go to feel satisfied with ourselves and feel satisfied with our art."

AVENGED SEVENFOLD was forced to miss this past Friday night's (May 12) concert at Lincoln Financial Field in Philadelphia, Pennsylvania as the support act for METALLICA after the band's guitarist, Synyster Gates, flew home to be with his wife Michelle who unexpectedly went into early labor with the birth of their first child.

AVENGED SEVENFOLD was back on stage with METALLICA last night (Sunday, May 14) at MetLife Stadium in East Rutherford, New Jersey.