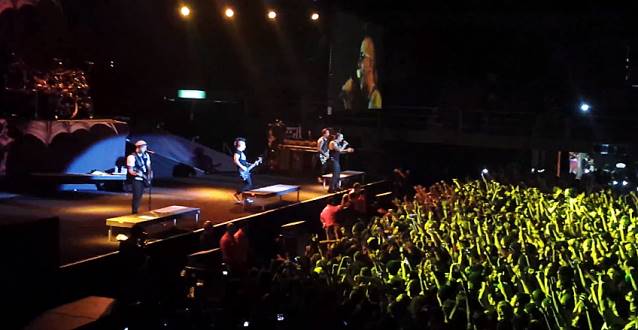 The following are some of AVENGED SEVENFOLD's recent South American concert attendances/grosses, as reported byBillboard magazine:

According to The Pulse Of Radio, AVENGED SEVENFOLD has a lot of plans in store for the rest of 2014, but first on the band's to-do list is the long-awaited arrival of its mobile video game, Hail To The King: Deathbat. The game has been two years in the making and singer M. Shadows told The Pulse Of Radio where things are at. "It's gonna be a big game," he said. "It's really pushing the boundaries of mobile in a lot of technical ways. Right now we're just working out the bugs. You know, there's some people sitting in a dark room somewhere just playing the game over and over and sending us notes on it. So that's kind of where it stands."

AVENGED SEVENFOLD will head out this month on a spring North American headlining trek dubbed the "Shepherd Of Fire Tour" in honor of the band's current single.

The dates will kick off on April 12 in British Columbia, hitting arenas in the United States and Canada as well as several major festivals before winding down on May 17 at Columbus, Ohio's Rock On The Range blowout. Support on the headlining dates will come from HELLYEAH.

The song "Shepherd Of Fire" is taken from AVENGED SEVENFOLD's 2013 album, "Hail To The King". The single is the band's second consecutive chart-topper on the Active Rock radio chart, following the album's title track.