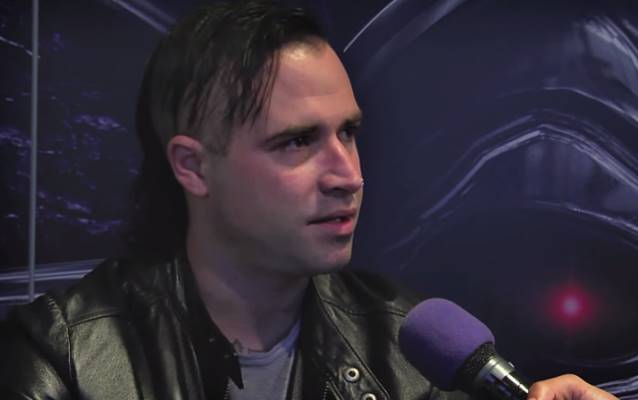 AVENGED SEVENFOLD bassist Johnny Christ was interviewed at this year's edition of the Graspop Metal Meeting, which was held June 27-29 in Dessel, Belgium. You can now watch the chat below.

According to The Pulse Of Radio, AVENGED SEVENFOLD is almost finished putting together its Hail To The King: Deathbat mobile video game, and singer M. Shadows revealed to Revolver magazine that it will include an avatar of late drummer, Jimmy "The Rev" Sullivan. Shadows explained, "With the blessing of his parents, we put The Rev in the game. Once you unlock his character, you can use him as your comrade to help you through the levels."

Guitarist Synyster Gates told The Pulse Of Radio that the extended time needed to develop the long-awaited game will be worth it. "I mean, we've been spending the last two, two-and-a-half years developing this thing, and it's turning out outrageously, unbelievably perfect in every single way," he said. "But it's taken a long time. So we're really coming close with finishing, you know, everything on our end, and then it goes into testing and stuff like that. But yeah, it's definitely really impressive."

M. Shadows said that each band member has his own custom weapon or power, including a double-edged sword for drummer Arin Ilejay, a demon with magic powers for Synyster Gates, a "Hell Sword" which rains blood on people for bassist Johnny Christ and "Shadow Sight" for Shadows himself.

The game is expected to be available this summer, although a release date has yet to be announced.

AVENGED SEVENFOLD and KORN will co-headline this year's Rockstar Energy Drink Mayhem Festival, which kicks off its annual run on Saturday, July 5 in Devore, California.

Other acts on the bill include ASKING ALEXANDRIA, TRIVIUM, BODY COUNT, SUICIDE SILENCE, MISS MAY I, TEXAS HIPPIE COALITION, DARKEST HOUR, UPON A BURNING BODY and many others.

AVENGED SEVENFOLD is touring in support of its 2013 album, "Hail To The King", which debuted at No. 1 last year on the Billboard album chart.