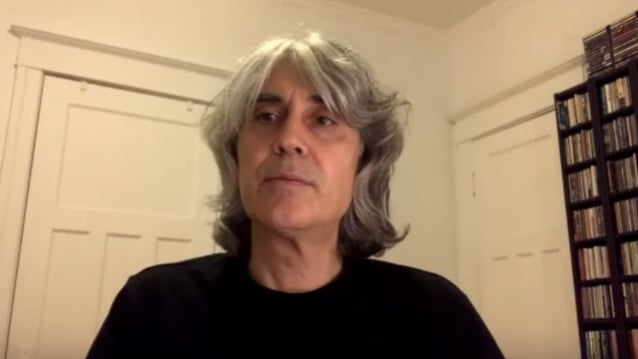 In a new interview with the "Aftershocks" podcast, VOIVOD drummer Michel "Away" Langevin was asked if he and his bandmates were surprised by the overwhelmingly positive response to their last studio album, 2018's "The Wake". He responded (see video below): "We learned not to expect anything. But we worked a lot on it, so we knew that it was very good vintage VOIVOD with a new twist, in a way.

"When it came out, we started a tour in Europe, so we were in Romania when it came out, and as soon as the album came out, the clubs got really packed everywhere," he continued. "It was very instantaneous. All of a sudden, we had a very great buzz, and we just surfed on it for almost two years. And we ended up winning a Juno [award, the Canadian equivalent of the Grammy Award] in Canada, which is a big deal for us. Everybody loved it — the people into VOIVOD and the journalists and the label, and everybody was really into it — so it's a good indication for us that we are following a good path with this proggy-fusion-thrash thing. But VOIVOD being VOIVOD, the next album might not be the same."

Langevin recently told Metal Pilgrim that VOIVOD "recorded improvisations and bits" of new songs in January and February, and spent the last few months working on these "templates." He explained: "Now it's just a matter of getting to Snake's [singer Denis Belanger] new studio and jam together and morph it into VOIVOD material. But I really doubt that it's gonna come out before end of 2021 or early 2022. That's realistic. Especially if we focus on learning specific albums [for possible upcoming live streams]. Let's say we decide to learn 'Nothingface' or 'Dimension Hatröss' or 'The Outer Limits', it's a lot of work and many rehearsals.

"I think the whole process of writing new material has been slowed down a lot," he continued. "But thankfully, we are synced up with Logic Pro online and are sharing a Dropbox folder, so with the new technology, we were able to write new material while socially distancing."

Asked about a possible storyline for VOIVOD's next album, Away told Metal Pilgrim: "We've been asked if we would resurrect the Voivod character, and we're thinking about that… We have a messenger chat with the four of us in the band, and we discuss a lot, and it came up a couple of days ago, and we're looking into that. And also, I asked Snake what type of lyrical content he was looking at, and he said he doesn't wanna focus on the COVID situation; he says he doesn't really wanna think about the pandemic situation. He's moving onward.

"We're still trying to deal with the puzzle about the 20 bits of songs we have and trying to make it into something coherent," the drummer explained. "So I think that the next step is for everybody to get together at the new studio that Snake is building, and then it's really gonna morph into a real thing. But I think the content of the lyrics side is coming up quick, and we have to figure it out eventually, because sometimes it really ties everything together. What I mean is it's easier to write the album if you know what you're gonna talk about, and which subject comes before which and after which. So that's probably the mission this winter — to try to do a plan [for the lyrical direction]."

VOIVOD released a new live album, "Lost Machine - Live", on November 27 via Century Media Records. The disc was recorded in Québec City during the worldwide touring cycle for "The Wake".

"The Wake" was released in September 2018 via Century Media Records. The disc was recorded and mixed by Francis Perron at RadicArt Recording Studio in Canada. The album's artwork was once again created by Away.