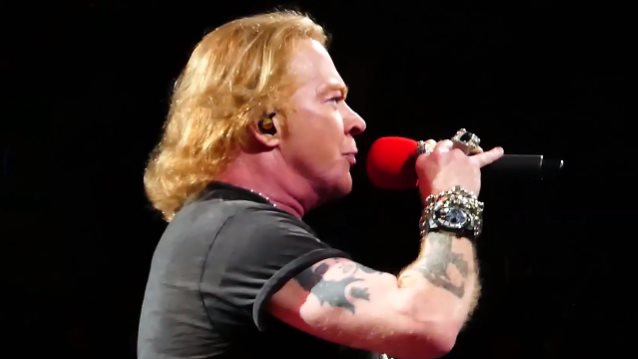 Axl Rose has criticized Mike Pence for his trip to Indianapolis to watch — and then abruptly leave — a football game Sunday between the Indianapolis Colts and San Francisco 49ers, calling it a "PR stunt."

The GUNS N' ROSES frontman took to his Twitter for the first time in five months to slam the vice president for leaving the game after some players knelt during the national anthem. Pence later said that while the players, who are protesting racial injustice, are "entitled to their own opinions," he didn't think it was "too much to ask NFL players to respect the Flag and our National Anthem."

Rose joined a chorus of Pence critics who argued the act was a costly stunt orchestrated by President Donald Trump, who tweeted that he had directed Pence and the second lady to leave the game if protests occurred.

Reporters who were with Pence's group on Sunday were told before the event that there might be an early departure from the game, suggesting the vice president's national anthem exit was planned.

Trump recently said that NFL players who kneel for the national anthem should be fired, and called on NFL commissioner Roger Goodell to tell them to stand.

Last December, Rose invited fans at a GUNS N' ROSES concert in Mexico City to beat the crap out of a large piñata designed to look like then-president-elect Donald Trump.