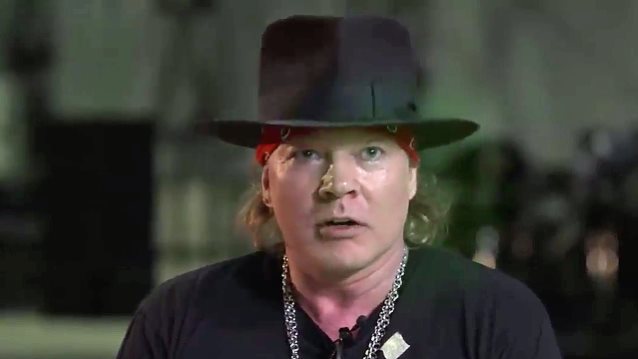 AXL ROSE Is Getting Wardrobe Advice From AC/DC

According to The Pulse Of Radio, Axl Rose is apparently getting some pointers on how to dress onstage from the AC/DC camp while he's on tour with them. A GUNS N' ROSES fan named Lumikki who posts at the unofficial GUNS N' ROSES forum MyGNR wrote online that she recently met AC/DC guitarist Angus Young and his wife Ellen in Vienna, Austria, with the Youngs revealing that they'd given Axl some tips about what he's wearing onstage these days.

According to Lumikki, Ellen Young said that she told Axl's assistant — possibly referring to his manager Beta — to tell the singer to lose the hats and sunglasses he wore at the start of AC/DC's current European trek, explaining that audience members want to see the eyes and face of the person performing for them.

Ellen Young also remarked that Axl was "very sweet" and "nothing but a pleasure to work with so far," adding that he was "very funny" and "brought a lot of fun into the band again."

Ellen also revealed that Axl had come to the band well-prepared and sang the songs exactly how they were on the albums.

Rose took over on lead vocals for AC/DC after singer Brian Johnson was forced off the road by the possibility of total hearing loss. Rose is slated for now to play AC/DC's current run of European shows as well as ten postponed North American gigs.