AXL ROSE On SLASH: 'I Consider Him A Cancer And Better Removed, Avoided'

Longtime Axl Rose friend and associate Del James, whose short story, "Without You", inspired the epic clip for GUNS N' ROSES' "November Rain", recently sat down for a chat with Rose and is sharing the results of that one-on-one exclusively with Spinner.com. A couple of excerpts from the chat follow below.

Q: Did you break up the old GUNS?

Axl Rose: It is my belief that the commitment to end old GUNS came long before the band started in the heart and soul of one man. After that, it became more visible sometime before/during [the "Use Your Illusion" albums], when the others opted for personal reasons to change our approach, styles and methods of working together. At the time, I unwittingly chose as a means of what I felt was both my own and GUNS' survival to adapt, and threw myself into whatever I could get out of that to support and promote our efforts.

The group shot of the band in front of the piece "Dead" was not a coincidence but not something I felt could be talked about openly, and something I hoped would change. I couldn't reach Izzy [Stradlin] and couldn't manage or curtail Slash and his personal objectives to take over GUNS anymore than I did at the time, and I'm lucky to have survived, got what we did out of it and some still enjoyed the results. But for all intents and purposes, the "Appetite for Destruction" lineup and approach was already dead, and with the addition of Matt [Sorum], the end of the then-lineup and what GUNS was really about was only a matter of time. Only heartfelt choices by the others could or would change that. Unfortunately, nothing did.

I'm generally blamed for the time it took to release "Illusions", but again the reality of my fault would be in not finding a way to manage Slash complete with his addictions and bring both him and Izzy together either similar to "Appetite" or in some other progression more conducive to GUNS than how "Illusions" was accomplished. Unfortunately, that never truly happened, and both GUNS and the public suffered for it. I'll take the responsibility in the sense that had I known how to achieve those goals we would have made what I feel would've been a more effective and powerful album at the time.

See? There's the catch, right? All this time, most thought I changed the direction with "Illusions". A lot of nonsense theories, speculation and complete nonrealities put together by others, based on Slash and others' crap and off one interview taken out of context I did with Kurt Loder where I said I hated "Appetite". That sentence has been used and twisted in every conceivable way since to vilify me and purports to prove my guilt and responsibility, when I wasn't speaking to the music itself but the overwhelming and at that time seemingly drowning success of our record.

My statement was in specific response to the feelings I had listening to DJs at the L.A. hard rock station KNAC at the time complaining about having to play the entire record for the umpteenth time for fans. I simply wanted to make another record and have it be as good or better. If you don't think I would've liked to have five "Appetites" and been living like the STONES at the time, you're high. With that, any other avenue I hoped to pursue musically would more than likely been available as well. This was something I could never get through to the others with. Personal need to dominate in GUNS was very important to them. Izzy has to be in charge or he's not comfortable, same with Slash. Duff [McKagan] tries convincing himself he's equal partners with Slash. Each to their own.

Q: Would you consider a reunion with the "Appetite" or "Illusions" lineups?

Axl Rose: A lot more reasons than I'll get into here now. Different reasons for each version and each individual. The Izzy bit was fun — and also fun because we didn't have to rely on him in any way, which is how he prefers things and works better for everyone. That said, you never knew if Izzy would be there or not or if he'd remember the song or decide to leave early. It didn't cause any problems, because we were doing our show regardless and didn't have to depend on anything, but it did open everyone's eyes a bit and blow minds.

He called, asked to come out and negotiated a deal with management that it's probably best that none of us knew about or the fun would've seemed a bit more like being used or taken advantage of spoiling the moment. As it was, we had a great time.

It'd be highly doubtful for us to have more than one of the alumni up with us at any given time. I suppose Duff could play guitar on something somewhere, but there's zero possibility of me having anything to do with Slash other than by ambush, and that wouldn't be pretty. He wrote that whole bit about not having his guitar in Vegas, I'd assume, to save face. I was told by both the Hard Rock and different GUNS industry people who had come out to be supportive of the new band and were a bit surprised to see him there, especially guitar in hand, but just assumed it was a surprise for the show and we were in on the arrangement.

Steven [Adler] brings assorted ambulance-chasing attorneys and the nightmare of his mother. One gig, or even a couple songs, could mean years of behind-the-scenes legal aftermath.

Axl Rose: If the music was there, meaning new music, I can't say for sure right now — and there have been market surveys, and various promoters have put together different projections and analysis that in areas where there could be more, it's not enough to sell your soul and live in hell the rest of your life for, that's definitely certain. But that's the catch, right, the music? If I believed in that as a reality which, no offense meant to anyone, I haven't seen anything in all these years to convince me or we'd be doing this interview under different circumstances of some sort, to say the least.

It's not some place I want to be or have any interest in being. If I believed in it in regard to the music, not in direction so much but in how it feels and to what degree, then maybe it'd be another story. I'm in no way trying to be offensive to anyone here, and I'm allowed to have my own feelings in regard to what inspires me, not someone else. Other than a one-off or something, I don't really do songs because someone else likes them.

There is the distinct possibility that having his intentions in regard to me so deeply ingrained and his personal though guarded distaste for much of "Appetite" other than his or Duff's playing, Slash either should not have been in GUNS to begin with or should have left after "Lies". In a nutshell, personally I consider him a cancer and better removed, avoided — and the less anyone heard of him or his supporters, the better.

Read the entire interview from Spinner.com. 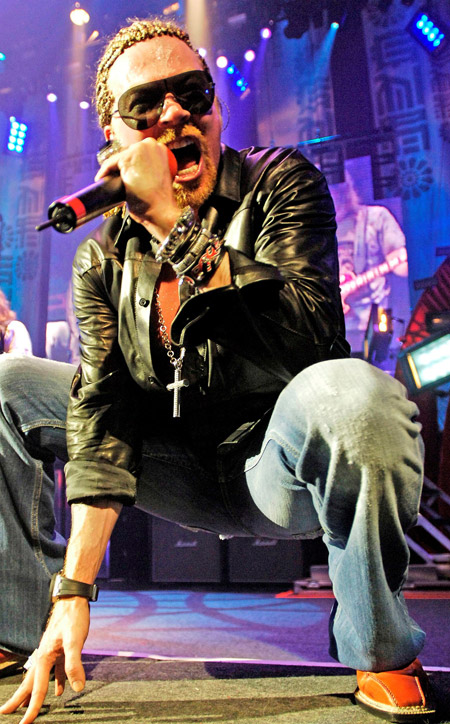