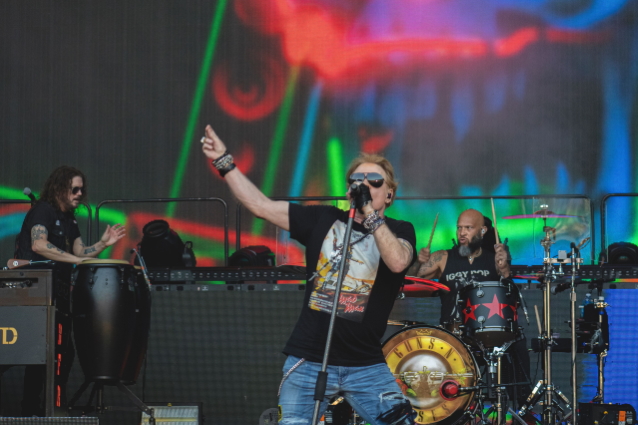 Axl Rose has responded to an Australian woman's claim that she was hit in the face by the singer's microphone during GUNS N' ROSES' concert in Adelaide on Tuesday (November 29).

The alleged incident happened while Rose and his bandmates were performing the final song of their set, "Paradise City". At the end of the track, the singer launched the microphone into the crowd, allegedly hitting the woman in the face.

The woman, who suffered bruises on her face, told ABC: "I was just putting out a warning for people: if Axl sings 'Paradise City', get ready to duck for cover." She added: "My intentions were not to gain anything."

The woman told the Adelaide Advertiser the mic hit her on the bridge of the nose. She said an off-duty policeman pulled her aside after she was struck and took care of her and attempted to stop the bleeding from her nose.

She added she worried about other concertgoers being injured as GUNS N' ROSES continue their tour in Melbourne on December 3.

"What if [the microphone] was a couple of inches to the right or left?," she said.

"I could have lost an eye...if my head was turned and it hit me in the temple, it could have killed me."

In a response to the woman's claim, Rose posted a lengthy message to social media.

"It's come to my attention that a fan may have been hurt at r show in Adelaide Australia possibly being hit by the microphone at the end of the show when I traditionally toss the mic to the fans," he wrote. "If true obviously we don't want anyone getting hurt or to somehow in anyway hurt anyone at any of r shows anywhere.

"Having tossed the mic at the end of r show for over 30 years we always felt it was a known part of the very end of r performance that fans wanted and were aware of to have an opportunity to catch the mic. Regardless in the interest of public safety from now on we'll refrain from tossing the mic or anything to the fans during or at r performances.

"Unfortunately there r those that for their own reasons chose to frame their reporting regarding this subject in a more negative n' irresponsible out of nowhere light which couldn't b farther from reality. We hope the public and of course r fans get that sometimes happens.

"A BIG THANKS to everyone for understanding."

Another fan reportedly ended up with the microphone Axl threw into the audience.

This was not the first time a microphone Rose launched into the crowd at an Australian concert has resulted in injuries. In 2013, a Perth man was allegedly hit in the mouth by a microphone Axl threw, causing damage to two of his front teeth. He later used the courts to demand compensation to recover the cost of $5,000 AUD in dental fees.

Rebecca Howe has been left far from Paradise after the Guns N’ Roses’ Adelaide Oval show, suffering brutal injuries she...

Posted by The Advertiser on Thursday, December 1, 2022

#Exclusive: 10 News First speaks with the woman who was hit in the face by a microphone thrown by Guns N' Roses frontman Axl Rose at this week's concert at Adelaide Oval.

Rebecca Howe described the blow like being "hit by a truck" and that she "could have lost an eye".

Watch 10 News First live at 5pm for our exclusive interview with Ms Howe, or catch up on 10 Play | https://10play.com.au/news