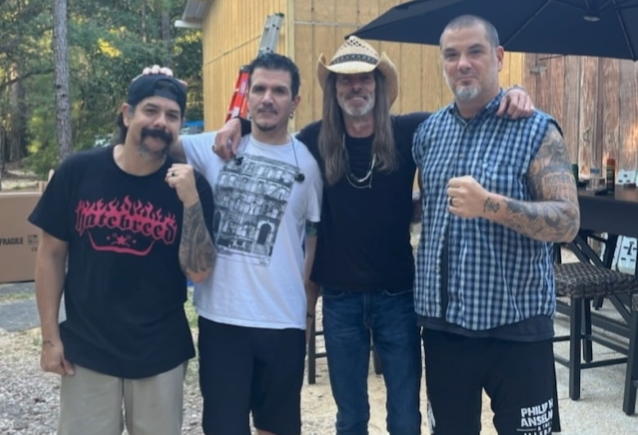 PHILIP H. ANSELMO & THE ILLEGALS guitarist Mike DeLeon has revealed that he filled in for Zakk Wylde at the first rehearsal for the upcoming PANTERA shows.

DeLeon, who joined PANTERA singer Philip Anselmo's solo band in 2015 as the replacement for Marzi Montazeri, took to his social media earlier today (Friday, December 2) to share a photo of him with Anselmo, Rex Brown and Charlie Benante, and he included the following message: "Wishing my brothers an amazing Return to the stage tonight. It's gonna be pretty Epic!

"Quick little back story, a few months ago I was asked to help out with PANTERA rehearsal #1. This was the Very First time that 3 of the 4 guys, as well as the first time in 20 years, Phil and Rex stepped into a room together to practice PANTERA songs. The feeling of being the only guitar player in a room like this, was definitely alittle overwhelming, but at the same time, so much fun n historical on many levels. Zakk was out on the road with BLS, and the guys wanted to make some noise. A total Dream come true being in that room, with these players and thier illustrious careers was a life changing moment for me personally... the songs themselves came over like the old days. Lots of energy, groove and power! It was surreal and emotional to say the least.. I was glad to be there and to be apart of that moment in time with a band that really helped shape my life.

"So tonight as all 4 guys hit that stage, in total celebration to the brothers Dime and Vinne, I wish them the best show and the tunes will be heard once again! Re..spect... Walk!

As previously reported, the reformed PANTERA — featuring surviving members Brown and Anselmo along with Wylde (OZZY OSBOURNE, BLACK LABEL SOCIETY) and Benante (ANTHRAX) — will play its first show in over 20 years tonight (Friday, December 2) at Mexico's Hell & Heaven Metal Fest. They will also headline a number of other major festivals across North America, South America and Europe and stage some of their own headline concerts. In 2023 and 2024, they will support METALLICA on a massive North American stadium tour.

It was first reported in July that Anselmo and Brown will unite with Wylde and Benante for a world tour under the PANTERA banner.

PANTERA will play two shows in Mexico — Hell & Heaven Metal Fest and Monterrey Metal Fest — followed by appearances at three Knotfest festivals in South America. There will also be a one-off show with JUDAS PRIEST in São Paulo, Brazil and a headlining concert in Santiago.

PHILIP H. ANSELMO AND THE ILLEGALS have been playing a PANTERA-centric set on their tours for much of the last four years.

Three years ago, Anselmo told Revolver that Vinnie Paul's "horrific" and "unexpected" death "was something that stopped me dead in my tracks. I was in my kitchen and I just dropped to the floor and just had to breathe for a little while," he said. "That's when the big plea for us to do more PANTERA songs became irresistible. The tribute had to be then. It had to be right. And I never thought it would be THE ILLEGALS. Clearly the mission for us was to be a sweaty hole-in-the wall death-metal band. I've got to say huge props to them for learning the PANTERA material. They didn't even flinch, man, and just went for it."

Wishing my brothers an amazing Return to the stage tonight. It's gonna be pretty Epic!

Quick little back story, a few...