On whether money was a motivating factor in GUNS N' ROSES singer Axl Rose reuniting with guitarist Slash and bassist Duff McKagan and Rose hitting the stage on time during the "Not In This Lifetime" tour:

Fortus: "No. Axl has been going on on time for years before [the reunion]. It's been great. Is [money] the motivating factor for him? Absolutely not. I've never seen that guy motivated by money, as long as I've known him. Otherwise, this reunion would have happened a long time ago."

On whether Slash's expensive divorce was a motivating factor for him to reunite with Axl:

Fortus: "I don't know. Honestly, I don't think [money] was a motivating factor for anybody, other than the stars just seemed to align. We didn't have a bass player, we didn't have a guitar player. Really, that's how it sort of happened."

On whether the reunion happened when Axl finally swallowed his pride and said, "Maybe I should call Slash":

Fortus: "No. I think Slash had been trying to get a hold of him for a while. And they sat down, and Axl was, like, 'Okay, let's just talk it through.' And they sat down privately, went through their laundry list of issues, and were able to put it behind them, and here we are. And it's been really great. It's been incredible, actually."

On whether it's one of those vibes where certain members of the band don't talk to each other when they're off stage:

Fortus: "No. It's not like that. Man, we communicate all the time. Between Slash, Duff, Axl and myself, every night there's texts going back and forth after… once we're back in our hotel rooms. We hang out, we all travel together on the same plane."

On what Slash thought of him the first time he met him:

Fortus: "I had actually been asked to join Slash's band a while ago — actually, at a THIN LIZZY show. We were playing a festival and his manager came up to me and said, 'Man, we'd love to steal you.' And I couldn't do that to my friend [Axl]. That would be such a slap in the face. [Once we started playing together] we got along great. We clicked really quickly. It was a trial period; we were checking it out: Is this gonna work? Duff and I had played together before. And it really clicked quickly and easily. We have a great rapport. We come from a very similar background, you know, as far as the classic rock and the punk rock stuff."

On Axl Rose singing for AC/DC:

Fortus: "It was incredible. I was absolutely blown away. I flew up to Detroit to see it. It was absolutely devastatingly good. He really killed it. He texted me when [he found out he was going to do the AC/DC gig]… He said, 'Hey, I haven't told anybody yet, but I'm gonna go audition…' Well, he didn't say 'audition.' [He said] 'I'm gonna go play with AC/DC and see how it goes.' And I was thinking to myself, 'Man, that's a tough… I don't know, man. That's a tough one.' And then everybody got back to me that went to the audition and saw it and said he was just amazing. And when I saw it, I was blown away."

On the possibility of new GUNS N' ROSES music from the current version of the band:

Fortus: "We are messing with ideas every day. I mean, every day we do at least an hour soundcheck, and we'll play through different ideas, like new ideas, put stuff down on tape. It's really organic. And it happens… Same in rehearsals — we were always putting down different ideas and gettin stuff together and getting ready for that, yeah."

As previously reported, GUNS N' ROSES is coming back to North America next summer for at least another 15 stadium dates, as the band continues its wildly successful "Not In This Lifetime" reunion tour. Axl, Slash and Duff, along with Fortus, drummer Frank Ferrer and keyboardists Dizzy Reed and Melissa Reese will kick off the new North American run on July 27 in St. Louis, ending on September 8 in San Antonio. Tickets go on sale in Canada this Friday (December 9) and in the U.S. on Saturday (December 10). 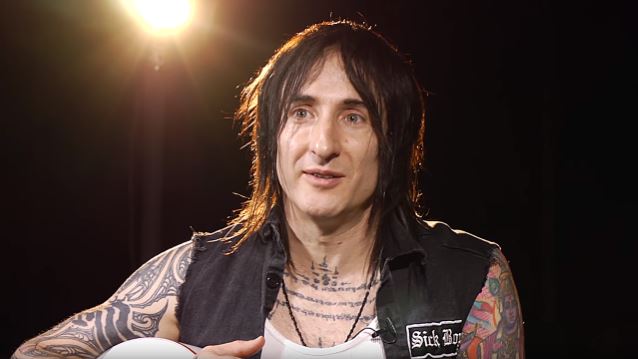