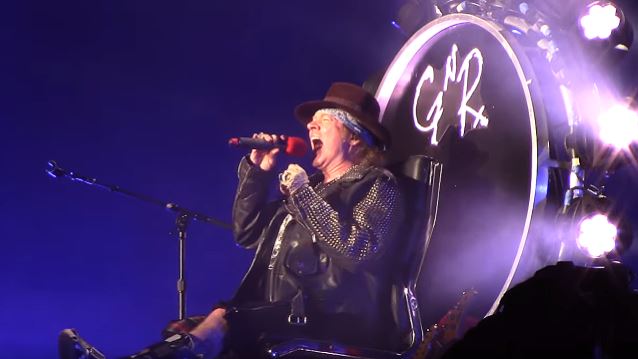 GUNS N' ROSES singer Axl Rose was filmed by TMZ.com as he arrived at the Los Angeles International Airport earlier today (Monday, April 25) to catch a flight to Europe to resume rehearsals for AC/DC's upcoming European tour. Check out the clip below.

Asked by the TMZ.com cameraman what his favorite AC/DC song is, Axl responded: "Right now, 'Touch Too Much'."

Rose also talked about GUNS N' ROSES' apppearances at the Coachella festival, saying, "The shows went really good. The crowd was amazing. It was really nice." He added: "The first show was good. The second show was more fun." Pressed on why he preferred this past weekend's gig over the one on April 16, Axl responded: "I don't know. The crowd was even more responsive."

The seventh live appearance of GUNS N' ROSES since the reunion of Rose, guitarist Slash and bassist Duff McKagan found Rose still confined to a throne after breaking his foot during the reunited act's first show at the Troubadour in Los Angeles on April 1.

Asked if he feels restricted by his injury, Axl told TMZ.com, "Not really." He also revealed that he expected to be able to remove the cast from his leg in "a couple of weeks."

AC/DC's European stadium tour begins on May 7 in Lisbon, Portugal and runs through June 12 in Aarhus, Denmark. Following that, Rose will head out on his previously announced summer reunion tour with GUNS N' ROSES, dubbed "Not In This Lifetime". AC/DC's ten postponed U.S. dates will take place later in the year, also with Rose as frontman.