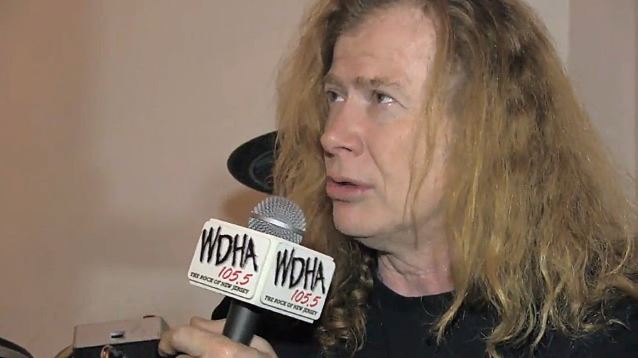 MEGADETH mainman Dave Mustaine was interviewed by Terrie Carr for the latest edition of "Box Of Rock" on WDHA-FM 105.5 FM, the rock music station licensed to Dover and Morristown, New Jersey. You can now watch the second part of the chat at this location. A couple of excerpts follow (transcribed by BLABBERMOUTH.NET).

On recent reports that he was planning to release his second book:

Mustaine: "All I had said was that I did have a lyric book that I wrote of all the songs [from the] first twenty years of my career and turned it in to Sanctuary Publishing, when we were with Sanctuary, and then their publishing company folded. So they gave me back my book, let me keep the check, and I was very happy about that. So I've got a book that's complete sitting at my house, but it's only the first twenty years; there's been another fifteen after that, almost, so I need to update it. And I think after becoming a New York Times best-selling author, there's a way that you learn how to write and the way that you get what you're trying to say conveyed to the reader different from when you're talking with them. They have to be able to read what it is you're trying to talk to them about. So it's a little different. And the other thing, too, is you see some of these books that are put out, and it's just mudslinging and name calling. I remember reading this one book. I flipped through a couple of pages, and this one dude, I know this guy. 'Oh, I'm screwing, and I'm drugging. She's hot, and I've got three girls.' And I flipped the page, and there was more girls and more drugs. And I'm going, 'Dude, I was there. You were never that lucky. Maybe you had girl magazines.' And you know what? If I'm a fan, I don't wanna know what the guy's doing in bed. I wanna know how he got to be a rock star. I wanna know what his life was like so I can see the comparisons between said rock star and myself, so that I can see if there's any congruency, where maybe I can be like you or better even. And a lot of times when you're reading some of those books, you're, like, 'God, I'll never do that.'"

On the recently completed reality-show pilot that he and his family are seeking to premiere and turn into a series:

Mustaine: "Yeah, they did shoot a pilot. Electra [Dave's daughter] and Pam [Dave's wife] and Justis [Dave's son] think it's funny to… People don't really know the real Dave is. They know who I am on stage, but they don't know what it's like when I'm in my bathrobe in my house. .. [The reality show] may [come out]. Right now, they just finished colorizing it, so they're working on that. You know, music is my bag; that's what I do. So if this happens, it happens; great. If it doesn't happen, you know, it's still not gonna keep everybody on the entire globe from knowing everything we do. My kids are tweeting pictures of everything that passes my teeth. And it's, like, 'Stop! You're taking pictures of everything I eat.'"

On being considered a "legend" and one of the architects of heavy metal:

Mustaine: "Do I feel like an architect? No. I think it's flattering you said that. You know, metal music isn't all that different from other types of music; it's just played with a different passion, I think. And I think that classical music and metal music are probably the closest in similarity because we're trying to convey [a] picture [with our songs]. For me, I think that a lot of times when you listen to classical music, the music itself is telling you what the words can't. And I think a lot of times, if you can hear a song and a song will speak to you and you don't need some guy coming up and going, 'Baby, baby,' then that's a good song."