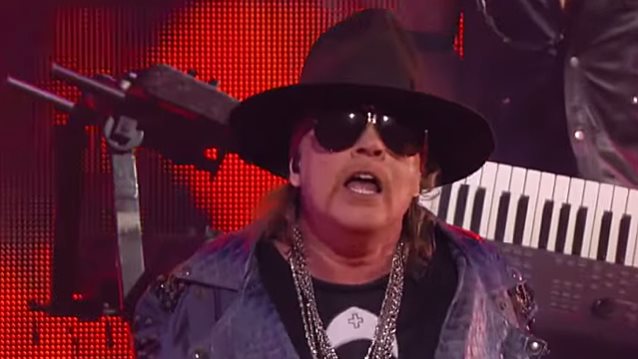 According to Torrent Freak, Axl Rose is attempting to rid the Internet of a photo which has gone on to inspire a slew of "fat Axl" memes.

The GUNS N' ROSES singer issued a DMCA takedown notice to Blogspot and GoogleUserContent demanding the image — which shows Axl looking a little bloated during a 2010 gig in Canada — be taken down as it infringes copyright.

"Copyright image of Axl Rose. Please be advised that no permission has been granted to publish the copyright image so we cannot direct you to an authorized example of it," the notices sent by Web Sheriff, an anti-piracy company based in the United Kingdom that provides intellectual property, copyright and privacy rights protection services for clients, on behalf of the rocker read.

Photographer Boris Minkevich at the Winnipeg Free Press, who took the original photograph, told TorrentFreak he was unaware Axl had been trying to "cleanse the web" of his picture.

Even though the photograph was taken by Minkevich, Web Sheriff claims he is not the copyright holder.

"We can gladly confirm that all official / accredited photographers at [Axl Rose] shows sign-off on 'Photography Permission' contracts / 'Photographic Release' agreements which A. specify and limit the manner in which the photos can be exploited and B. transfer copyright ownership in such photos to [Axl Rose's] relevant service company," the company told TorrentFreak in a statement.

Minkevich could not recall if he signed any contracts, as suggested by Web Sheriff, but the company believes there are still grounds to have the picture removed.

"[If a photographer] was there and taking shots without permission or authority, then other considerations / factors would come-into-play as to what such individuals can and cannot do in terms of attempting to commercially exploit the resultant images of someone else's show," the company said.

At press time, Google had not yet complied with the requests to remove the images and all remain up and accessible. Furthermore, the original photo can still be found on the Winnipeg Free Press web site.

The picture Axl Rose wants removed from the web https://t.co/DauplX4v6z