Japanese pop-metal band BABYMETAL has announced a limited-edition NFT trading cards pack drop via WAX blockchain — available for 72 hours starting May 6 at 11:00 a.m. EST at babymetal.cards. The release, limited to 1000 packs, each containing ten trading cards (each card is 1 of 1000), represents all ten episodes of the "Metal Resistance" — the ten chapters of the band that have unfolded since their inception a decade ago. All of those chapters are explored in the band's recent best-of album, "10 Babymetal Years" — the first ultimate collection of highlights taken from the band's three studio albums "Babymetal" (2014), "Metal Resistance" (2016) and "Metal Galaxy" (2019), creating a unique and seamless tie in with the trading cards. "10 Babymetal Years" was released digitally in North America on April 23, with CD and vinyl available for pre-order now and releasing in late July.

Each pack of cards will be $100 and will come with an exclusive limited-edition gold-colored vinyl of the "10 Babymetal Years" LP, available only with these packs. The transactions will be made via credit card or PayPal, but fans will need to create and connect a WAX wallet to complete purchase.

The Worldwide Asset eXchange (WAX), known as the King of NFTs, is the world's leading entertainment NFT network. Cofounded in 2017 by William E. Quigley and Jonathan Yantis, WAX delivers the safest and most convenient way to create, buy, sell, and trade virtual items and physical products (NFTs and vIRLsTM) to anyone, anywhere in the world. WAX has facilitated the trade of more than 100 million digital items of collections including Blockchain Heroes, Topps GPK, Deadmau5 and Capcom's Street Fighter.

BABYMETAL played 10 shows at Tokyo's famed Nippon Budokan venue earlier this year as part of the group's tenth-anniversary celebration. The shows, which marked the final chapter of the "Metal Resistance" era, kicked off with two dates in January (19 and 20) and four concerts in February (16, 17, 19 and 20).

A book about the first ten years of BABYMETAL, "Bessatsu Kadokawa Souryoku Tokushuu", was released in Japan in October. It contains a long interview with Su-metal and Moametal as well as never-before-heard stories from band producer Kobametal from BABYMETAL's decade-long history, photos taken from live shows, a discussion between Demon Kakka and Kobametal, and much more.

BABYMETAL's third studio album, "Metal Galaxy", was released in October 2019 via earMUSIC/Edel. The follow-up to 2016's "Metal Resistance" is based on the concept of "The Odyssey Of Metal Galaxy". 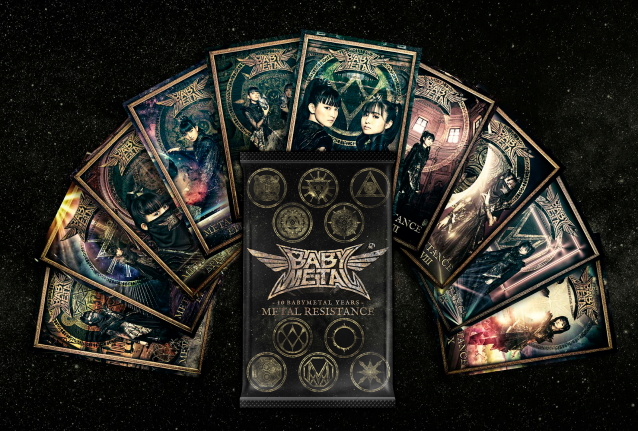