Japanese pop-metal band BABYMETAL will play 10 shows at Tokyo's famed Nippon Budokan venue next year as part of the group's 10th-anniversary celebration. The shows, which will mark the final chapter of the "Metal Resistance" era, will kick off with two dates in January (19 and 20) and four concerts in February (16, 17, 19 and 20) before continuing later in the year.

BABYMETAL's Moametal told Billboard about the upcoming concerts: "I consider the Budokan shows as the period we properly display everything we've gained in our journey over the past 10 years, and our gratitude to everyone who encountered us along the way."

BABYMETAL recently released a greatest-hits album titled "10 Babymetal Years". Ten songs are featured on ten special editions of the LP, including a Regular Edition released on CD and vinyl; First Press Limited Edition A, containing a Blu-ray with all 16 of BABYMETAL's music videos on it; First Press Limited Edition B, which comes in a special vinyl-size CD cover containing ten newly taken photos of Su-metal and Moametal; and First Press Limited Edition C, which includes a Blu-ray featuring 10 Legend Movies, a special video of ten songs chosen by fans in the 10 Legend Songs Tournament. Members of the BABYMETAL fan club, The One, can also purchase The One Edition A, which includes a karuta battle set (Japanese playing cards); and The One Edition B, which comes with the "Chronicle Set", featuring a video containing interviews with the bandmembers. Also being made available are the Su-metal Edition, Moametal Edition, and Kobametal Edition, each of which comes with all three different Prophet Cards included in all the other editions mentioned and each with unique serial codes. These three bandmember editions also contain ten songs chosen respectively by each member of their personal favorite tracks the band has released. A special X Edition will arrive at a later date and will come with a mystery item that "Only The Fox God Knows", which will serve as the final piece of the puzzle to "10 Babymetal Years".

A book about the first ten years of BABYMETAL, "Bessatsu Kadokawa Souryoku Tokushuu", was released in Japan in October. It contains a long interview with Su-metal and Moametal as well as never-before-heard stories from band producer Kobametal from BABYMETAL's decade-long history, photos taken from live shows, a discussion between Demon Kakka and Kobametal, and much more.

BABYMETAL's third studio album, "Metal Galaxy", was released in October 2019 via earMUSIC/Edel. The follow-up to 2016's "Metal Resistance" is based on the concept of "The Odyssey Of Metal Galaxy". 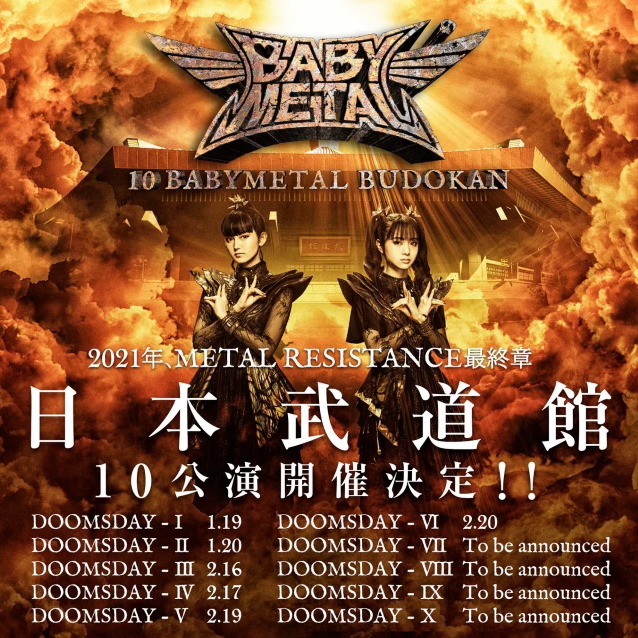