Following its recent U.K. support-slot announcement for RED HOT CHILI PEPPERS, which kicks off next Monday at London's O2 Arena, Japanese pop-metal sensation BABYMETAL has announced it will open for Los Angeles rock legends GUNS N' ROSES on a four-date tour of Japan in January 2017. These Japanese dates are an extension of GUNS N' ROSES' current "Not In This Lifetime" tour — the first to feature Slash and Duff McKagan reunited with singer Axl Rose since 1993.

Says BABYMETAL's Su-Metal: "I am really happy that we’ve been confirmed as support on the upcoming GUNS N' ROSES tour. And it's happening in Japan!! We're going to create a live performance that shows how wonderful Japan is together with everyone in the audience on that tour."

BABYMETAL will release a new 13-track live album, "Live At Wembley", on December 9 via earMUSIC/Edel. A digital version will be made available on December 30. With a carefully selected track listing, the CD captures the spectacular performance recorded at BABYMETAL's first-ever U.K. arena show, "Babymetal World Tour 2016 Kicks Off At The SSE Arena, Wembley", which took place in London on April 2. The show saw BABYMETAL become the first Japanese artist in history to perform a headline show at The SSE Arena, Wembley. This concert garnered an attendance of 12,000 people, where BABYMETAL also broke the merchandise sales record of the venue, creating history once again. 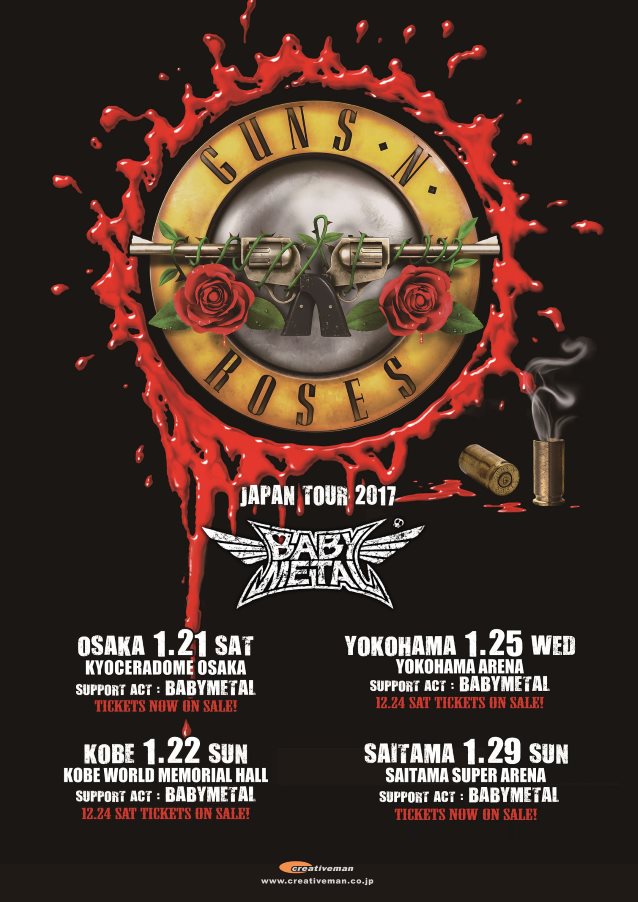