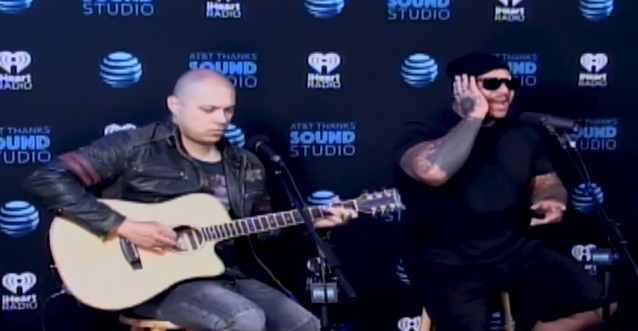 Tommy Vext and Doc Coyle of BAD WOLVES performed an acoustic version of their band's cover version of THE CRANBERRIES' "Zombie" in the 97.1 The Eagle AT&T Thanks Sound Studio. Check out video footage of the performance below.

Vext recently said that he and his bandmates were "overwhelmed" by the reaction to their rendition of "Zombie", which they have released in tribute to THE CRANBERRIES' late singer, Dolores O'Riordan.

O'Riordan was slated to record vocals for BAD WOLVES' cover of the track (which she described as "killer") on the day of her passing. The band decided to release the song in her honor with all BAD WOLVES' proceeds going to her children.

Vext said the idea of covering "Zombie" came about when he was writing material for BAD WOLVES' debut album.

"I kind of do the same thing every day: I go to the coffee shop, I write lyrics and then we go to the studio. And 'Zombie' came on the radio," Tommy recounted. "It really took me back to a place. I loved THE CRANBERRIES when I was a kid. I started playing music when I was 13 and them and NIRVANA and SOUNDGARDEN were these alternative bands that really, really touched me. And then I looked into the lyrics and really got into it and it felt like we should really do this thing."

After finding out about O'Riordan's passing, "I was devastated," Vext said. "I think the whole band has kind of being going through a process. It's one of those things, it's like: we don't mourn the death of an artist because we knew them; we mourn them because they helped us know ourselves. And that was my experience with her art and her music."

BAD WOLVES' debut album, "Disobey", will be released on May 18 via Eleven Seven Music.

The band will tour the U.S. later in the year with FIVE FINGER DEATH PUNCH and SHINEDOWN.