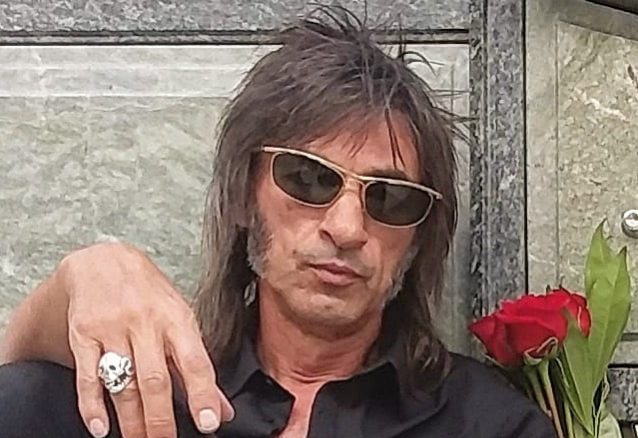 Original THE QUIREBOYS bassist Nigel Mogg (pictured) has rejoined forces with the band's fellow founding members Spike (vocals) and Guy Bailey (guitar). The trio is working on new QUIREBOYS songs and is planning to eventually release a studio album. Live shows featuring this new QUIREBOYS lineup will launch later in the year.

The news follows the public statement made by three of Spike's former bandmates expressing a desire to part company with the singer, although Spike has always maintained he has never, and would never, leave the band he founded, a band he fronts and says he has created the intellectual property for. THE QUIREBOYS is a band that has gone through various lineup changes over the years, with Spike being the only consistent, original member.

Spike, whose real name is Jonathan Gray, comments: "Guy Bailey and I are so pleased Nigel is back, I never wanted him to leave the band. Nigel is such a special friend and I know so many fans have been really hoping this would happen.

"When three members of my band announced their split away the other month, it was sad this was accompanied by comments on my character that were unnecessary and untrue. I am refraining from running former band members down because it doesn't achieve anything and, in simple terms, everyone just has to move on. As it happens, so many positives have come from the negatives in recent weeks. I'm reunited with original members of our band, Guy Bailey and me are writing new music again, old songs from the early days have been uncovered for completion and live shows now are on the way. That's right, we'll be announcing dates for our first two QUIREBOYS shows for the autumn in the next week or so.

"Once again - and I don't apologise for the fact I keep saying it - an enormous and heartfelt thank you again to you, the fans, whose support has been absolutely phenomenal through such an unsettling time. You have been the extra band member through this time of change and we'll repay the love and support with new QUIREBOYS music and shows."

Nigel adds: "I've known Spike since we were 18 and he's one of my best friends. People know him as the bigger-than-life rock & roller he is on stage - as he should be - but behind the scenes he's genuine, kind, hard-working and very loyal to people. I've really felt for what Spike has been put through and it's time to stand with my friend. I called Spike this morning to offer my services and told him I was all in. So I'm heading to London, plus he's got Pete Way's bass at his house for me."